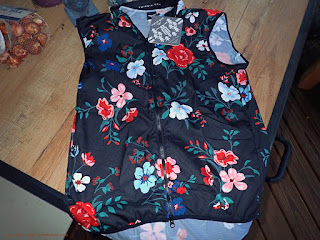 NOTE: I bought these Twin Six products with my own damn money. This is not a paid review. I am doing the review without the knowledge of Twin Six or its distributors and marketing folks.

Another disclaimer- I've been a fan of the Twin Six guys and their stuff since, what? 2005? Since they cranked out their first thing, which was a pair of socks. I had those, and since then I've had several things from Twin Six. I used to be on their "Team" as a sponsored rider, and I've received product from them in the past at no cost to me. I happen to really like their stuff.

I already have purchased a bicycle at employee discount and several items of apparel, along with some water bottles from them at full retail in the past few years.

So, that's where I'm coming from with this review here, so you understand ahead of time my biases. That said, I won't hold back with any criticisms of this wind vest if they are warranted.

Okay, so why a vest? Great question. I was not a 'vest fan' until a few years ago when Ben, my partner in RidingGravel.com made the suggestion that I get one when we did the custom Riding Gravel jerseys. Well, it really wasn't a 'suggestion' as much as it was done at his insistence. So, I got one thinking it very well may be a waste, but that I would try it out. And you know what? Ben was spot on about how versatile vests are and about how much I would like them.

Well, you cannot have just one vest! So eventually I got a 45NRTH Naughtvind vest, which is nice, but it is really lightweight. I mean, I barely use the thing since there are very few days that its light, barely there fabric is worth having on. So, I decided to give this T-6 vest a try as it much more closely resembles the one I have with the Riding Gravel livery on it. Plus, it has flowers on it. Y'all know I like me some flowers, right?

Okay, so here's a bit of the technical babel from the T-6 website.

Okay, a few words on the above spec. First, this stuff is pretty true to size. Check the T-6 sizing charts before pulling the trigger on anything and you will be rewarded with a correctly fitting garment. This is a wind vest, so it fits snugger than not, as it should. You don't want a wind garment that flaps in the wind, if you care about aero and working less than you have to.

The three back pockets are deep. Water bottles will stay put. Yes- that makes getting smaller stuff from the bottom harder while riding. The two-way, full-length zippers are beefy and high quality. I really despise poor zippers, and many garments for cycling I have, and have had in the past, fail because of chintzy zippers. I believe these T-6 zippers look a lot more like something that should hold up. That said, I am not a fan of two-way zippers. It is not something I would ever use, and they are fussy. It's an over-complication of a simple thing that should not be over-complicated, in my opinion. YMMV.

The suggested temperature range is just that- suggested. I find garments like this to go well below 50°F for me, and in fact, I wouldn't even consider putting this wind vest on at anything above 50°. But there again, I am not like most folks, or maybe just some folks.

Made in the "Oooo-sa!". Yeah, that's cool. More so now than ever, actually. But again- this may not hit you in the same way it does for me. I think it does inform the sizing though, as many overseas made apparel items are sometimes ridiculously small for the stated sizing.

Now back to the choice of a vest. I thought of one other detail that pushed me toward this vest and not the similarly designed Ritual Wind Jacket. That jacket only cost a little bit more, but it did not have the three rear pockets that the vest has. I think a wind jacket that ends up covering up your jersey pockets is limiting, and the Ritual Wind Vest does not do this. If the wind jacket had the three back pockets, or even a zippered, 'marsupial' style pocket, I would have strongly considered it. But T-6 didn't do this, so I opted for the vest after much back-and-forth before pulling the trigger.

I do have wind jackets which do feature zippered pockets for carrying stuff, and I love that about them, however, they have bogus zippers. Did I mention how much I despise poorly made zippers?