Once You Were Weird

Last Summer I realized that I had owned and ridden "The Snow Dog" for ten years. I wrote all about my personal history with this bike. I detailed the changes, and where it sits now in my stable of bikes as far as usage and purpose.

But one thing I did not get into, and which is also now ten years old, is the prevalence of fat bikes as a bicycle type. That may not seem like a thing to mark now, but if you jumped in and got a fat bike in 2011/12, you know what I mean when I say, these bikes were show-stoppers.

Everywhere I went, people would gawk, stop or slow down in their vehicles, and maybe even yell something nice out the window at me because of these bicycles. There was just something about a fat bike which elicited a sometimes visceral, sometimes child-like curious reaction. Questions! Oh my, yes.....all the questions!

"Are those hard to pedal?", or maybe the "Are those motorcycle tires?" comments were the earliest. I'd often get "Wow! That's a cool bike! How much did it cost?" Or, "That looks heavy! How much does it weigh?" Of course, often these would be followed by the famous, "What's a bike like that for?", or "Those only good for snow then, right?" I might even get the question asking where I got it. There were probably others I am forgetting.

I remember when I was riding home from work one day on the original Ti Muk I owned. A car slow-rolled besides me and was filming me riding on his smart phone. Sheesh! That was odd! But such were the reactions of folks, and it stayed that way up until about a couple of years ago. Then I think something happened that kind of has made fat tire bikes ubiquitous in the minds of the general populace. 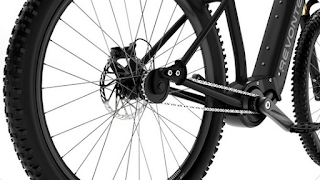 I call 'em HPC's (Hybrid Powered Cycles) because they have two power sources- electric motors and human power - but whatever you want to name these, they have become commonplace and fat tires on these are nothing unusual. In fact, average folks seem to want those over conventional bicycle wheels when it comes to HPC rigs.

And the entry level/Amazon/internet brands seem to have picked up on this by offering wider tires in several diameters. 20", 22", 24", 26", and 27.5"ers are all running around on 3"+ wide rubber now. Common folk seem to think seeing a fat tire on a bicycle now is a dead giveaway that the bicycle has a motor.

I got that take once when I was riding the Ti Muk 2 home from work in 2019. Of course, I had the generator lights blazing, so I suppose that also falsely pointed folks in the electric motor direction. But a guy rolled up beside me at a stop sign, rolled down the passenger side window, and yelled, "Hey! Is that an electric bike?" To which I answered, "Nope! I'm the motor on this thing!" The motorist looked at me with a disgusted look, shook his head as if to say, "You're insane", rolled his window up, and that was that! There was no way in his mind that I was not on an electric motorized bicycle, and he wasn't having anything to do with my explanations.

I guess I was seen as being a weirdo. It used to be that the fat bikes were weird. Not so much anymore....

Ha. I got this "must be an e-bike" every second of the year while riding the Commando. So much so, I applaud those who acknowledge the bike as just a fat bike. The cool thing, though, is I find no one wanted to steal a non motorized fat bike. At worst, you just have to look out for the one wheel action kids (the ones doing wheelies, not the electric unicyclist).

I will share two funny moments, as people always think these things are slow or not mountain bikes. I was at Green River State Park in Kentucky mid year. I highly recommend the trails out there!! Get a local guide to follow though as the signage is poo. I had heard there were "real" mtb trails vs the flow trails I had been finding in Ohio. I got lucky to find two local riders coming out at the trail head. They were on Ripley AF and Santa Cruz High Tower. I explained to them I do not care how rough the trail gets, just go- I ride up in ME. Later I found out they thought I was joking about handling NE trails on the fat bike. I think it was the fact I was wearing a certified BMX helmet to MTB. I took a track that they said was not a trail and not even a full-sus rider would do. Then we found out their rigs weighed more than the fat bike by 2-5 pounds. Another moment came in Vermont. If anyone has ever been across there to Brattleboro they will know going to town is easiest by bus or eastward. Here I am traveling west from town fully loaded to ride the VTXL (do not waste your time riding that route...my opinion). A local cyclist on a Lemond passes going east turns around and catches me as the climb starts up Hogback mountain. First thing he says is hiw heavy the bike must be. I am use to these comments so I like to mess with folks. I reapond "well, that's your opinion". Then he goes on to say more science(y) kinda stuff about friction. I keep with the ridiculous responses, something about low cost fat tires have a slick coating on them. At some point I realize he stopped talking. I look back and see him way way back down the climb. I just laugh. I stop to put on my jacket at the top which is when he catches up. He looks at the bike much deeper and says, "wait, that thing is not an e bike?! You were moving a good clip. I thought it had a motor". I responded, "Stop being disrespectful, you are just slow, slim." He seemed pretty angry about that response and took the lead going down. I felt bad he had to swerve at the cracks and rumble strips while I just rolled right over them with zero care.

I hope these stories make you laugh GT...

@teamdarb - Yes, those stories made me laugh. I can almost imagine how that must have looked with that guy in Vermont. Too funny!

I really have never explored the East at all. I find your descriptions interesting. I know another guy in Vermont as well and he amazes me with his tales of that area. Of course, N.Y. Roll thinks New York is "all that and a bag of chips" and lets me know that all the time.

I'll have to get out that way sometime. I've had many invitations to do so.