Will Gravel Bikes Have Suspension?:

Yet another stab at making gravel bikes into ultra-short travel MTB's has been unveiled by Swiss bicycle maker BMC. Their newest gravel bike, the URS LT One, has 20mm of hydraulically damped front suspension and a short travel elastomeric based rear suspension.

The bikes are made in carbon fiber and feature rack and fender mounts along with a 45mm maximum tire clearance. The front fork is routed for a dynamo hub as well. The two versions of this bike offered will be quite expensive with the top of the range being 7K+.

Comments: BMC dubs this suspension concept "Micro Travel", and at a mere 20mm of movement, I'd say that is pretty spot on marketing. I would also say that it is pretty useless to have the amount of complexity required to achieve such minuscule amounts of movement. The FOX AX fork I have ridden, with 40mm of travel, wasn't capable enough, in my opinion, to make it worth the extra weight and complexity. But this BMC deal is certainly lighter, yes?

Actually, no, it isn't. Another report on the bike I have read claims that the BMC fork weighs about the same as the Fox AX. Really? And at half the travel? Wow..... Plus it is proprietary to the frame? Ah.....thanks but no thanks. Let's remind ourselves here that a Redshift Sports ShockStop Stem has 20mm of effective travel, weighs 260-300 grams ( depending upon length), and can be put on any bike with an 1 1/8th steer tube at a cost of $160.00. Plus, if you get tired of your ShockStop equipped bike, you can move on to a new bike and keep the stem.

The ShockStop is easily tuned, has minimal moving parts, and almost zero maintenance. If I am going for 20mm of travel, the price of 160 bucks sounds a lot better than 7K+. Just my opinion.....

So, to answer the question which led this section- No. Not this way, at any rate.

Oh! And One More Thing About That:

Just the other day. "Velo News" mentioned that "Another retired European road Pro jumps into the US  gravel scene". (Story here) His name is Paul Voss, and he states in the "Velo News" article that he came over to try out gravel racing because of the over-all feeling that it was closer to 'true sport' and that it seemed to have a more relaxed set of rules for participation. He specifically called out the camaraderie amongst riders who were willing to stop and help those that had crashed, had a flat tire, or other issues.

We've heard this before from former Pro roadies who heard about gravel racing and dropped in to check it out. People like Ted King, in particular, have really understood and exemplified the 'gravel culture' as it was formulated in the Mid-West. But now all this would seem to be something akin to window dressing, at least amongst many of the Pro/former Pro road riders who are doing gravel events now. I reported here last Saturday that some dissatisfaction has been expressed by certain Pro riders over the lack of formal road racing style rules, especially "... if there's money on the line for the win...."

And one more thing that I will add here- This UCI nonsense really should have zero effect upon the 'gravel scene', as it is mostly having to do with Pro rider issues and money. What they are about is not gravel racing. It's just more and more looking like Pro Road racing on a different surface. Hopefully Mr. Voss won't fall under that spell again.

Oh yeah....The UCI is also doing a similar series and World Championships for fat bikes too. You're welcome.

Comments: Interestingly, the press release I got had zero information as to spec. Prices are going up, but the entry level Rangefinder holds the line at $1099.00 which is what the 2021 model was. However; I cannot compare the spec, so......

I think people are going to be shocked at what a "real" MTB is going to cost in 2022. Sub-grand MTB-looking bicycles are not going to cut it anymore, and let's be honest, they haven't for many years. But I feel this benchmark is going to be ending up well above 1K, more like $1200.00 to $1300.00 now for a "just okay" hard tail that will get you by. 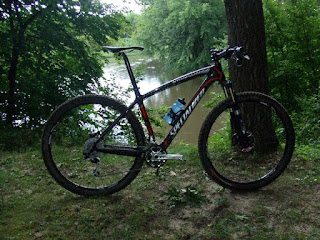 After several years of Trek news breaking about the company buying up retail outlets, now it seems Specialized is also turning down that road as well. The news comes from "Bicycle Retailer and Industry News" who reported that McClain's Cycle and Fitness has been sold to Specialized.

Specialized hasn't really pursued retail outlets run direct by the company up until this point.  Although, it has long run a few retail stores, mainly in SoCal.Trek, meanwhile, has been on a retail store buying spree over the last several years to the point that many industry insiders reckon that Trek is the largest specialty bicycle retailer in the U.S.A. now.

In cases where Specialized has lost its footing due to Trek retail store chain takeovers, they have resorted to 'delivery operations' which fulfill online customer orders. But now it would appear that they are being a bit more aggressive in going toe-to-toe with Trek in the retail sector.

What does it all mean? Time will tell, but it would point to more Brand specific stores, much like single brand car dealerships, in which consumers would then have no choices but for the brand that the store is owned by. This is not new in the bicycle industry, as anyone older can attest to. Schwinn tried the concept starting in the early 1960's and had the nation covered in "Authorized Schwinn Dealerships" by the early 1970's. When the mountain bike came into being, Schwinn failed to capitalize on its popularity until it was too late, which contributed to the company going bankrupt in the late 90's. This- and other factors - ended the 'Schwinn Approved' dealership model. Now it would seem that we are on the verge of seeing this revived in some form by Trek, Specialized, and who knows who else.

That is all for this week! I hope you all get some riding in and have a safe weekend.

We may see Lauf or a lauf knock off do something. I think their concept is better. Or does the headset suspension of the Diverge work best? Old C-Dale headset suspension concepts? I think fork suspension is over kill and the weight is unneeded for the stroke you want. I took the advice from MJ to double wrap my bars in 2014 and ran a 41 Knard. It worked well, and this was my early days of bikes. So explaining to a local bike shop in Cedar Falls what I wanted was a problem. I never saw a bike shop owner try to talk himself out of sale like that. Simple cork base layer with a salsa gel bar tape was all I wanted. But maybe people needed to be reminded of simple cheap solutions that get you somewhere. Also wolf tooth has that thick tape that works well. Suspension seems overkill for what I ride. But people in Bentonville are rocking their Allied bikes on Single Track. So if I am reading the Walmart tea leaves, they want 45 to 50mm tires and drop bars. Basically a 29er version made of carbon of the drop bar Mtn bike phase. So now I wonder what is wrong with a drop bar 29er hard tail?

@N.Y. Roll - The suspension part could be something along what Cannondale used to do with their Headshok idea. The problem there is that those sorts of ideas are proprietary and not a universal fit for any bike. Then you get into travel, how it is damped- or not, and what the added complexity of service intervals and parts availability is. Not worth the juice for most rider's needs, in my opinion.

The flip side, the drop bar 29"er hard tail question, and what people are doing with their gravel bikes on MTB trails is a connected thing. First of all, you want a drop bar 29"er? Fargo. It was pretty much there in its initial incarnation, but many would say now that Salsa designed out a lot of what made it popular with those who are using gravel bikes on MTB trails. The Fargo now is heavy, sluggish, and over-built for what those people are after. Any MTB-certified chassis will end up that way due to fears of litigation. It's why no one makes a frame like they did in the '90's anymore.

Secondly, the issue- in my opinion- is driven by what FS and good hardtail MTB's cost now. You cannot touch a decent FS MTB for under 3K anymore while a great gravel bike that is far lighter, more responsive, actually climbs fast, and can do road riding can be bought for well under 3K. Hard tail MTB's are somewhat less money, but also suffer from the DH-oriented geometry which kills the bike for fast ups and flat riding.

So, a gravel bike does a lot more in an efficient manner. Now people that are doing single track want to 'push the easy button' and somehow retain all those gravel bike traits AND have MTB suspension added in? Go back to the 90's and see how that worked out. In my opinion, it isn't going to happen in this time and design climate, which leans on certifying designs that won't cause brands to suffer future litigation.