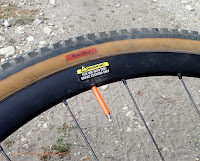 Just this past Tuesday I posted my first review of the Tubolito tubes I received. (See post here) Since the beginning of this week I have noted an issue which has prompted me to make an early call on one of the two Tubolito tubes I have in hand.

As you may recall, one of the Tubolito tubes is the standard 'weight' one with 2X's the puncture resistance of a standard butyl tube. The other, which is supposedly about the same strength as a standard butyl tube, is the S-CX version which weighs about half as much as the standard Tubolito. That is to say it is not just light, but it is crazy light. So, the issue was with the lighter weight, S-CX Tubolito.

I found that air retention is not very good. I went down to retrieve the bike I have that tube installed on to ride it Monday and the front tire was flat. Hmm..... I pumped it back up to 40psi and heard no immediate issues, nor noted a drastic drop in pressure within a few minutes. So, not a catastrophic leak. Then I did a 24hr leak down test. The result the next morning was another flat front tire. I did not have time to dig into this until Wednesday when I removed the Tubolito and did a dunk tank test to see if I could ascertain whether or not I had a puncture or failure so small it allowed the tube to leak down slowly. I found no evidence whatsoever of a slow leak or failure on the part of the Tubolito.

So, my hypothesis is that the lighter, S-CX version of the Tubolito is much like a latex tube in terms of air retention. The Tubolito site does not seem to refer to any S-CX air retention data, not that I could find, so this may actually be intended. It would make sense here as Tubolito calls the S-CX the "ultimate spare tube" solution. So, I'm taking a cue here and pulling that Tubolito and packing it as a spare for now.

Interestingly, the rear mounted Tubolito, the standard one, has retained air as stated by Tubolito. That is to say much like a standard butyl tube. Which, as you might recall from your experiences, is very good. So, as far as using a Tubolito for a 'daily use' situation, I already have decided that the standard version is the way to go here and that a S-CX, or any lightweight Tubolito, is best used as an emergency spare. A way to 'get you back to the start', and then to change that out as soon as can be done.

Also- the question of whether a Tubolito is a 'one-and-done' product seems to have been answered by one of G-Ted Productions' readers in the comments on Tuesday's post, (Thank You!), but I can now confirm that with careful handling, an S-CX Tubolito can be salvaged and re-used again. Big emphasis on the 'careful handling' bit though! This tube came out feeling very fragile and thin-walled. Like a stretched balloon for a child's birthday party, only maybe even a bit thinner! I imagine a slight tug on the valve stem, or even if one folded the Tubolito incorrectly, that this could permanently damage the S-CX Tubolito very easily. So, yeah.....be careful in how you handle this thing!

NOTE: Please read the Standard Disclaimer page for an understanding of my relationship with products reviewed on G-Ted Productions. Thank you!

A little off topic here pertaining to the Surly Extraterrestrial tire. I know you were running the 2.5's on your Fargo and your old troll, me also on my Fargo and personally I have found it to be a pretty great all round tire for most everything with proper air pressure even though I'm running on first generation tires with tubes. Now with the new generation version which is tubeless ready and has a slightly different longer wearing rubber compound and come sized in 700 X 41 as well as 650B X 46c and by their past performance on gravel, snow, and semi packed sand have you explored either of these sizes as a viable gravel tire ? I just recommended to a guy on your Riding Gravel Forum looking for a 700 X 40 that worked for soft sand a Schwalbe Marathon Plus HS 404 or the Surly Extraterrestrial 700 X 41 while probably reminding him as others did only a really knobby or wide fat bike tire would probably do, if he could find them.
Any thoughts on any of this ?

@ baric - Hey there! Extraterrestrial tires in thenewer sizes are not something I've tried. I only have ridden the 29 X 2.5 and the 26"ers.

Sand? Well, cyclo-cross guys and gals run sandy courses a lot. When you cannot float, (as you and seemingly others have already pointed out as being the best way)you have to overcome your tire/bike limitations with technique. That's how CX racers do sand. Yes- it is very hard and difficult, being that this relies upon great fitness and skills, but short of 'getting the right tool', you have to understand that your equipment is handicapping your abilities to traverse that sand. (Or sandy gravel, whichever the case may be)So, you have to overcome the obstacle in other ways. Tires, when they are simply overwhelmed, won't really help much there, I am afraid.