Another long-low-slack geometry hard tail? (yawn) But there is a reason I post on this particular model today. It has more to do with its influence and history than it does with this third generation of the bike.

Go back ten years ago. 2011 was a time, if you can recall, when many said that 29"ers would "never be in the long-travel categories or be all that good for anything playful and fun on real mountains". They were decent XC bikes, sure, but - you know - serious mountain biking? That was the province of 26"ers and the , at that time, new 27.5"ers. 29"ers would certainly never be 'that bike' you would ride on rowdy mountain trails.

Then Canfield Bikes, and a few other niche brands, started fooling around with 29 inch wheels. The parts were barely  serviceable for such exploits, but they made it work. Canfield found itself a hit with the 29"er "Yelli-Screamy" model, and 29"er freaks were all over this bike when it came out back then. This sudden popularity of small brand hard tail and full suspension bikes with big wheels eventually got the bigger brand's attention. It took a few years, because the industry's dalliance with 27.5" stuff had to run its course first, but then 29"er hard tail and full suspension rigs started dominating the lines of the big brands by the mid to late 'twenty-teens'.

So, here ya go. A hard tail which was a ground breaking model ten years ago, revamped for 'modern geometry', and at a price for a frame that, amazingly, is still pretty reasonable at $799.99. See Canfield Bikes for more.

What?!! You've never heard of Serenissima Gravel? Why, it was the very first PRO only roadie event held on gravel, that's all. (So, what is Strada Bianche then?) But you could be forgiven if you have not heard about this. It really doesn't affect many of us in the gravel community.

But for some, this may be seen as a 'validation' of gravel as a racing surface. For me? It's nothing but PRO UCI sanctioned road racing on a different surface. Novel for roadies, perhaps, but calling this a 'gravel event' is a big misnomer. See, 'gravel events' are not just about licensed, male, elite athletes with no other riders and no 'culture' besides typical roadie fare.

No, a 'gravel event' encompasses much more than racing. It is about finding one's limits, learning about how to be a self-sufficient cyclist, learning about caring for others, and it is all-inclusive. It is NOT just for the highest categories of male (and female, one would think) racers. However; Serenissma Gravel held its PRO only event with just one day of males racing. No females. And, of course, you could ride the next day on the course the PROs used (gasp! Really! You let them do that!) in a 'fondo'. Woo.....

But again- some may think this sort of thing is the bee's knees. And that's fine, but it is not 'gravel racing'. This is a gravel event, if you are wondering what I might mean. And so is the next item ..... 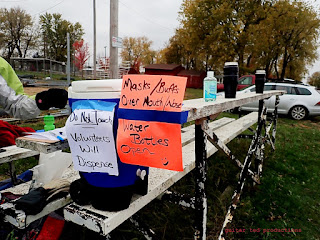 Remembering When Things Were 'Iffy':

About a year ago this weekend I did something I thought was a bit daring. Some would say I was being a bit cavalier about the situation, and risking too much too soon. I went out of town to volunteer at a gravel event.

And now you think that sounds really mundane, right? I mean.....so what? I went somewhere and did a good deed. Why on earth would that be 'risky'?

Well, I think we all have kind of forgotten how tense we all were just a year ago with this whole COVID deal still ongoing. (And really, we still are not out of the woods yet) There was no vaccine, there were still social distancing and mask mandates, and fear and anxiety was high. People were unsure of what was 'okay', and doing a bicycle race was barely on that side of the line of being something folks wouldn't get too upset about if you were to engage in that activity.

I had not driven beyond the bounds of Black Hawk County, at that point, in nearly six months. I had only been in a few towns by bicycle outside of Waterloo in that time, and we went once to Cedar Rapids for a football game my son was in. I had not seen anyone outside of Waterloo in nearly half a year. So, going to volunteer at the Spotted Horse marked a line, a breakthrough of sorts, and socially it was a bit of a shock and a relief. It actually was so uplifting that I felt guilty for doing that when so many other people were left sitting around in fear.

Like I say, we are still dealing with this pandemic, but a year ago we were still engaged in fear and anxiety at a much higher level than we are now, in my opinion. The Spotted Horse, for me, was a big release of tension and a day which gave me some hope that we would, at some point, be doing things again socially. And that has mostly come true.

I just wanted to mark this anniversary and say 'thank you' again to Dori, Sarah, and Steve, the RD's of the Spotted Horse. Good luck on your event this weekend.

That's a wrap for this week! Have a great weekend and thank you for reading G-Ted Productions.