What a week. It had been as tough as you might think in some ways, easier than you'd believe in others, and weirder than I'd have possibly imagined it could be. When your mother dies, you'd expect some things, but I was thrown some odd curve balls and well.....I may not ever quite understand what happened.

A bit cryptic, perhaps, but then again, I cannot be expected to share all the details here, and frankly, many of you probably would rather I did not. Suffice it to say that I needed to get out on a bicycle ride to clear my head of a few things and just enjoy Life for a while.

Weather has been a big factor here of late with storms and rain. The latter part of last week was a real doozy here with grey skies, rain, and cooler temperatures. But Saturday was supposed to be nearly idyllic for Fall. So, I planned a morning ride. Not a Sunrise ride, because hunting season is in full steam here and I didn't want to be mistaken for some game. So, I waited until about 9:30am and hit the streets out of Waterloo from my house here.

I decided to roll with the Black Mountain Cycles MCD since it is set up with a few things that I am testing for RidingGravel.com. The basic outfit I wore last time I was out was employed again, but with the change to a Craft windproof jersey instead of the wool Bontrager one. No real reason for that other than that I just grabbed a different jersey.

The route plan was to go North, but I wanted to see if I could find some Fall color, so I went East down Newell and over to Nesbit Road because I recalled that last year when I was doing "The Quest" that I had been up Nesbit in the fall and the trees up that way were pretty spectacular.

So I went out that way and figured I'd come back over the top of Dunkerton and over West with a final run with the wind back toward Waterloo. The day could not have been any better with hardly any clouds in the skies and a temperature in the upper 40's ending up in the mid-50's by the time I had finished.

It's been awhile since I've put together a longer ride and I was wondering how things would go. No need to worry there as I felt great for the most part. I guess being off the bike and only getting in short rides when I did ride of late has pushed my tolerance of the saddle and handle bars back, but the rest was good for my performance as I haven't felt better in a long while. 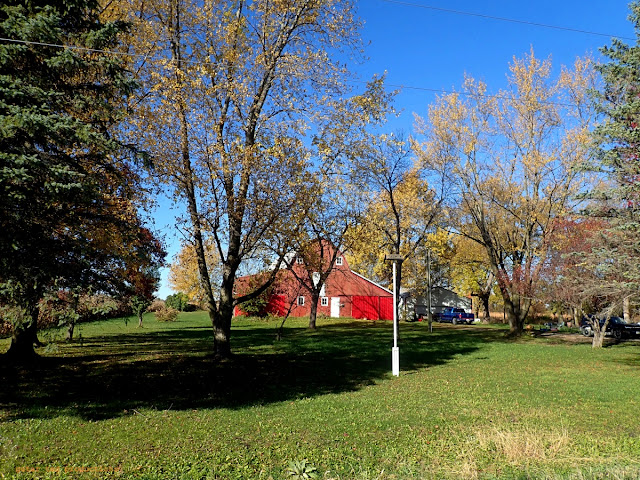 As I went a bit East of Dunkerton and into a more wooded area bordering the Wapsipinnicon, I was wondering if I'd see any hunters. I had only been passed by a few automobiles by this point and had seen no farming activities at all. Only idle equipment sitting in half harvested fields. But I did not even see any hunting activity here. I did scare up a rooster pheasant on Wheeler Road, and maybe a half mile later saw a car parked at a nature reserve. Maybe there was some hunting going on after all.

I scared up another rooster pheasant on Owen Road and then after that I spied several Red Tailed Hawks again. This time I was able to grab a pretty good shot of two flying together ahead of me from utility pole to utility pole on Bennington Road. 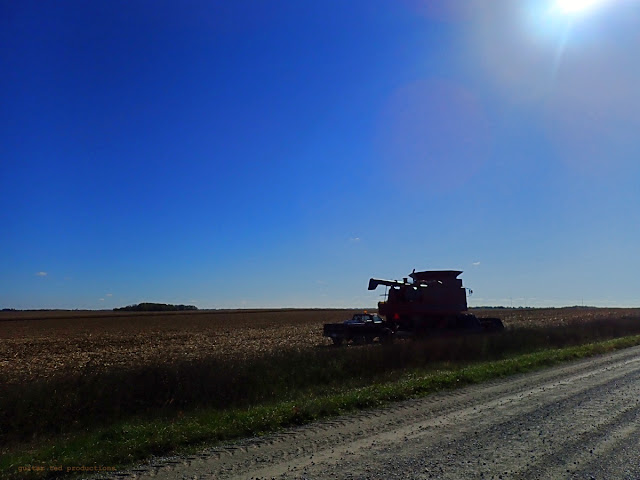 Eventually I turned South and what wind there was pushed me back to Waterloo and finally back home. It was a great three hour ride and I was refreshed and felt tired at the end of it, but good. It was good to exercise my body, my mind, and see Life happening out in the country. It was necessary after a week like I have been through.

There is just something about a good ride in the country that works for me. It brings me joy. I like to experience that. Maybe I'm a bit weird that way, because many folk would think riding on gravel in Iowa where I live would be intensely boring. I don't know.....

I ran across a younger than I woman crossing the road in front of a farm I was passing on this ride. I waved and said, "Good Morning!". She responded in kind, then added, "The gravel a little harder?". which was shorthand for, "Isn't riding on gravel harder than on pavement?", which ultimately means. "Why are you riding out here?" As a Mid-Westerner, you understand the translation immediately.

I just chuckled and replied, "Aww! I'm used to it!", and I turned around as I was passing her and looked ahead and smiled. She thought me odd for doing what I was doing. I was feeling really good about it. I was really happy the season has been extended this long so I could be on that ride.

Coming from a born in Californian, you have some beautiful views we really don't get here. And those barns! Not boring at all!! I remember seeing barns when I helped out at the catfish farm when I was a pre-teen which had similar views in the local farms way back then. It's nice to see something other than pine trees in the Sierra Nevada forest.

I understand about when a parent passes, things come out that we didn't know or throws a curve. When my Grandfather past, there was some stuff that was found out and luckily dealt with in a positive manner. I hope what you and your family experienced will not do harm to anyone.

@S Sprague - Thank you! I am glad you enjoy the views.