NOTE: Okay folks, if you haven't been around long enough here to know what a "Randomonium" post is, then here is the deal. I ramble, rant, and randomly moan about all things cycling in one, incohesive, bizarre post. "Randomonium", okay?

One of the benchmarks for bicycle prices we use in this area is the price of 'entry level' pavement bikes. Bikes with flat bars and multiple gear, derailleur  drive trains which are sometimes called 'hybrid bikes' or 'fitness hybrids', or something along those lines. The price point on these bikes is where the 'meat' of the market is for many Mid-Western bicycle dealers.

Well, as we have suspected, the price of entry is going up. Not by just a little bit either. I saw a price the other day for what I would term as Trek's most popular bike in this category, the Verve 2. I was shocked, quite frankly, and I think many consumers will be as well once they can come in and see new bicycles on dealer floors again. And that brings up another good point.

These are the type of customers who need to see the bike before they will buy. I don't discern any difference here when it comes to age groups either. Young, old, and in between- all want a test ride and to 'see what ya got' before parting with their hard earned, and now less powerful, dollars.

Thinking about this, I feel like the last time any regular human being had any sense of what a bicycle from a bike shop cost, it was 2019. The pandemic erased market knowledge since, well....you know, there weren't any bicycles to look at. Now when these same folks see new bicycles, maybe in 2022, they will see completely different pricing.

Here's what I found: A 2019 Trek Verve 2 (with rim brakes) was $569.00 MSRP. Trek has Verve 2 Disc bikes on their site right now at $749.00 MSRP. Yes- disc vs rim brake, but with the remaining specs being nearly identical, I'm not falling for a disc brake upgrade costing $180.00 more. Nope, and neither will consumers. All they will see is that bikes cost a LOT more now than they did pre-pandemic. And that is going to dampen sales to some degree. I'm thinking to a large degree, but I could be wrong. 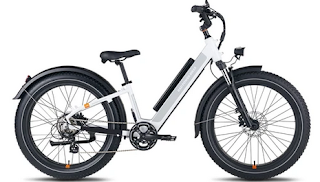 Rad Power Bikes To Build In The USA?

Last Thursday news broke that Rad Power Bikes, the direct-to-consumer brand for lower priced Hybrid Power Cycles (HPC's) was now funded again to the tune of $329 million USD. That's all well and fine, and some in the industry press have kind of poo-pooed this news, but it remains significant because of how Rad Power has made inroads into the US market.

While other companies have more horsepower and have invested heavily into HPC (ebike) tech, they aren't actually showing up on the streets. Not like Rad Power and Pedego, (another upstart HPC brand) are around the US. Rad Power is beating the traditional brands in innovative ways, and at prices far below what traditional brands can offer, so what if 'bigger companies' have invested more?

Anyway, what is really interesting is a hint given in a story on this new round of funding for Rad Power found online at "electrek" in this story. In that article it is hinted that something is going to be produced in the USA for Rad Power and it would stand to reason that it could mean assembly of bikes, much as with what I posted on concerning Cannondale in last week's "FN&V" post. But whatever happens there, it is obvious that Rad Power is going around end on major brands in several ways. This is the company that has purchased their own containers and leases smaller cargo ships to insure that they have product flowing into the market where other brands are stuck in the current supply chain morass. It is Rad Power that is bringing product that many consumers want, (Fat tires, On-demand throttle) whereas traditional bike companies tend to focus on eMTB and price thier fitness hybrid HPC's far above that of brands like Pedego and Rad Power.

I see it in our area. Rad Power bikes are proliferating. So are other non-traditional brands of HPC's. Trek? Specialized? Giant? Not so much. I am afraid that traditional brands are really not understanding the consumer that an electrified bike appeals to.

Okay, so I thought I would give a quick update on this Twin Six wind vest I just got not long ago. You can read about the thing here if you missed it earlier.

I thought I would say that first- this works as well as I'd hoped it would. It fits great and does keep the wind out. I LOVE the three pockets. But you knew I would if you'd have read the linked post above.

What I really wanted to get at here with this quick update is that I have noticed that I have not had an issue with the zipper. You might recall that in my linked post above that I made note of the two-way zipper and how I thought that was a weak link in this vest.

I still think that mostly, but I noticed that I did not have any issues at all with the zipper on my long ride Saturday. I had to stop, what was it? Three times, I think, to take a "Nature Break", and all three times I had to unzip the vest and re-zip when I was done. (Thermal bib tights, ya know?) Anyway, it was during one of those stops when I realized that the zipper went right up with no issues. Just like it should. No extra fidgeting with the thing at all.

First, kudos once again to Twin Six for using a quality zipper. Secondly....yeah, but it still is a two-way zipper. It's a component with an extra point to fail. I'm not saying it will, but as I stated in my opener on this, I just am not a fan of this type of zipper. I see no reason to have it, but maybe I'm missing something here? Tell me if I am, but to my mind it is an unnecessary feature which could cause a failure of the zipper in the future. I've had other two-way zippers foul up, and long before the rest of the garment was ready to be retired.

And with that this brings this "Randomonium" to an end.

Back in my Wisconsin roadie days, during spring and fall one indispensable piece of kit was a wind vest with a high collar, mesh back and a 2-way zipper. I think I had Pearlizumi and Louis Garneau brands over the years. I liked how one could unzip the bottom for a little venting, while keeping the neck zipped tight and the draft off of your chest. And if the vest was zipped open but the bottom tight, you get the billowing sail feeling.
At one point I had a 1-way zipper wind vest and I couldn't stand it. SW Wisconsin has many long-ish blacktop climbs followed by fast (cold) downhills. Your post on zippers brought back good road riding memories, thanks!

Greets GT, here near the Gulf coast I need 2-way zip on my vest to vent, don’t want to get too toasty warm. 😀

I’m a big fan of two-way zippers for winter rides. The ability to open the lower area up while keeping your chest warm is a huge asset when it comes to keeping sweat at bay. Voler makes some excellent vests and training jackets with two way zippers that I’ve used without issue, some for more than 15 years. I actually bought a NOS winter training jacket from a teammate simply to have another, because the team we ride for switched apparel brands recently.

… BTW, agreed 100% on the reasons for Rad Power’s success and the price of bikes. It’s getting pretty insane when a decent “entry level” bike costs the better part of a thousand dollars. That’s simply not within many folks’ budgets…

I'm in agreement with MG on the two way zippers. As long as they are quality and work well, I find them to be benefit. Easy way to get some venting on coats and vests without getting a lot of "ballooning"