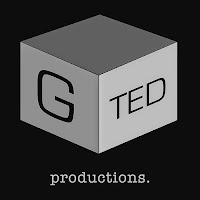 November means that pretty soon I will start my traditional 'end of the year' themed posts on the blog. Since some of you may not know about this stuff I do annually, I figured this post would be a 'fair warning' to you and let others know what to expect here as 2021 comes to a close.

I'll be doing the "Bikes of 2021" posts which will go back over the bikes I used over the past year, any changes made to them, and what the future looks like for each. There won't be as many as I've had in years past because I really focused my riding on fewer bikes than I have in the past. In fact, I looked at a couple of them down there in "The Lab" and was amazed that I hadn't ridden them at all in 2021! (See the previous two days of posts for more on those)

I'll be doing the retrospective on the year. I have done this in a few different ways over the past 15 years of this blog, but I think I will break it down into seasons again this time. So, expect a "Winter", "Spring", "Summer", and a "Fall" overview for 2021.

I'll probably do another "Top Ten Posts" for the year. It was fun to look back at that last year and to see what it was that tripped you reader's triggers as far as subject matter from this blog over the past year. So, look for another go at that in late December.

I'll also be doing a post with my picks for the best images on this blog for 2021. That will be 12, one from each month. That will post near the end of the year so I can choose one from December. Then I'll have a last look at what has happened here on the blog and a peek at the future on this channel. That should about do it for any special posts for the end of the year.

I'll still be doing the "Trans Iowa Stories" posts every Sunday through the end of the year. In 2020, I thought that series would have been concluded by now, but I can clearly see that it will extend well into 2022 now before I close that down. Then I will start up the promised look at the "Guitar Ted Death Ride Invitational", which was the annual Summer ride I used to invite people to join me on. Plus, as a bit of look into 2022, I'll do another "State of the Gravel Scene" post.

Look for some of this end-of-year stuff to kick off later this month here. 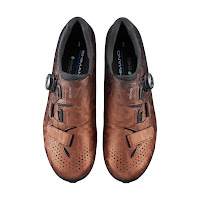 The Shimano RX 8 Gravel shoe has been out for a couple of years now. The latest new shoes Shimano released did not include an update on the RX 8 design, but they did toss out a couple of new colors for the shoes for your consideration.

Comments: The RX 8 is a fantastic shoe and with its hybrid design it makes great sense as a gravel going shoe. This is much lighter than average MTB fare for the feet and it isn't a three bolt cleat like a road shoe would have, so two bolt, walkable shoes, but with a nod to roadies. I've really liked the two pair I have now (Standard Disclaimer) and they have become my favorite gravel shoes, especially when it is hot out as they flow air very well. 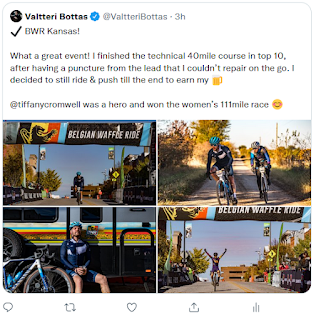 Even Formula 1 Drivers Are Racing On Gravel Now!

Recently the Belgium Waffle Ride (BWR) series ran it's inaugural event in Kansas. No big whoop except that a current Formula 1 driver used his off-week to race the event. AND he finished top ten!

I just find this amazing having been around the scene as long as I have been. I mean, there is NO WAY I would have ever have dreamed this could happen. A Formula 1 driver, and a current one at that, riding on gravel in the US? Nope! Never had that on my radar.

But such is the popularity of these events now. I suspect that we might even see more of this sort of cross-over. I'll be honest and let you know that I have actually thought about NASCAR drivers doing gravel because many of the drivers are cyclists. But their season is so long and they have an off-season over the worst of Winter, so...... Yeah, probably will never happen.

As an aside, At the BWR, apparently there was a course change and the GPX files, which were handed out ahead of the event, were not going to match up with the changes to course markers. Confusion, predictably, reigned, and also predictably, many folks were angry. (By the way, I saw that the entry fee was $225.00 a head)

So, yeah, that's all on the promoter(s) and they should learn a lesson here. Obviously they do not understand human nature, nor have they listened to, or taken heed of 15+ years of gravel event history. This has happened before and there are good ways to deal with it. I'm not going to tell anyone how to run their event, but when I see people defaulting to wanting lead cars and follow vehicles, as Pro Road Racing does, well, that's not gravel racing, and that isn't a good solution either. Again- check out what has been done before. It's all out there for anyone to read and learn from.

Since I first started writing about the supply chain issues in the bicycle industry this subject has become big-time, mainstream news. I think even the average citizen has heard something about this by this point into the pandemic times. Besides what I have written about this already, the only thing I think I would add here is that the supply chain issues are a LOT more complex than thought at first. With that said, here is a bit of an update as it concerns the bicycle industry in particular.

As of November 2021, the issues surrounding the bicycle industries supply chain issues show no signs of letting up. Where one bottleneck seems to open up, another crops up to take its place, while still others remain unsolved or are reaching critical mass in severity. On the one hand reports are coming out saying Vietnam factories are starting to open up after having been shut down for over four months due to COVID. On the other hand, I'm hearing about inland shipping issues in China due to pandemic issues which have affected shipping up and down the Yangtze River. Meanwhile record numbers of ships are at anchor off the ports of L.A./Long Beach with no relief in sight. Trucking issues, rail issues, and warehousing issues still plague the U.S. supply chain with no resolution in sight.

All this means that bicycles and parts will be short and in and out of availability on a pre-order basis only for most companies. If you plan on spur of the moment shopping you very well may find things much like they are now in shops and online. Some places may have things, most will not, and that will change on a weekly basis. Parts for repairs will again be scarce. Looking at 2022 my thought would be that you should start looking for replacement parts NOW and maybe you'll have a bike to ride with fresh bits by the Spring of '22.

New bikes? Some things will trickle in to traditional retail throughout 2022, BUT- Expect there to be a big move to online order fulfillment by most brands by the end of '22. Due to issues involved in trucking, warehousing, and in just getting products off the ships, brands will start to look at bypassing the traditional local bike shop model and shipping direct to consumer. Plus we very well may see more brands start North American assembly operations like we have already seen with Cannondale and now with HPC's like Rad Power Bikes, who are also planning to assemble and manufacture things here in the States. On-shoring of product assembly and manufacture will become much more attractive as the old 'just-in'time' supply model's long supply chain has been seen to have been exposed as being not very tenable in times of crisis.

And that's a wrap on this week's FN&V. Have a great weekend and thanks for reading Guitar Ted Productions.

Supply chain issues aren't the problem. It is the click-bait websites of manufactors and stores. How hard is it to put items which are in stock as a filter on the main page? Why does Joe Customer have to put in their zip code to find store near them to only be met with responses to contact the stores to inquire inventory? Why is no one reporting on this? This goes both for big and small brands, especially, component makers.

@teamdarb - Well, I think what you are describing was happening before the pandemic, just to a lesser degree. So, to be technical, it was a preexisting condition made worse by supply chain issues.

What you are describing, as I understand it, is retailers reticence to have every facet of their business known to their suppliers. The issue starts there because Brands/Component makers do not have franchised or directly owned retail outlets. They work through distributors and "independent retailers". For any brand or component maker to have live, running inventory information from every retail outlet they sell to just isn't a reality that the retailers want to be involved in.

This is why I believe you see more D2C than ever and why that direct to consumer style retailing will be proliferating in the future. At that point, one should expect that live inventories would be available to consumers, so you'd know right away if an item was actually available for purchase.

I was on a retail guitar site recently that had a set up which showed live inventories of products. While music shops are similar to Local Bike Shops,in that they represent many brands, the way some of these music businesses are run is much more forward thinking, in my opinion, than LBS in the bicycle industry are.

I believe we are on the same page.