Well, sooner or later things are going to get cold, sloppy, and frozen. So, with that in mind I have been thinking about how I want to tackle things for Winter this year.

Obviously I have the Snow Dog and the Ti Muk 2 to use when things get really nasty. Fat bikes are really awesome machines, but many days during Winter those bikes are overkill for commuting or for general purpose riding around. That's where my mind has been of late- how do I want to approach this Winter outside of using fat bikes?

Well, I like a single speed, and I like fenders. So, I have been sizing up a few ideas of late and I think I can work it out to where I should have most every base covered. Today's post will deal with my plans for my "Slop Season" bikes. The bikes I'd use when gravel roads are wet, or when slushy streets are free from ice, but messy.

The past couple of years I have relied upon the Black Mountain Cycles Monster Cross bike I have. It did alright in that role, but I have another idea there, which I may cover later on. The thing with the ol' Orange Crush rig is that it has a pretty high bottom bracket which makes things less than stable on uncertain surfaces like snow, mud, or the occasional icy patch. I'd rather have a lower bottom bracket bike for that, and it just so happens that the T-6 Standard Rando v2 is that bike for me.

I decided to try out this bike with fenders which I have on the BMC Orange Crush bike right now. With a bit narrower tire, and with the option to go 650B (wider tires) as well, since I already have a wheel set all ready to go with that set up, this bike might cover a lot of ground for Winter. I cannot do 650B on the BMC, because it has rim brakes, so this seems like a better way to go right now. 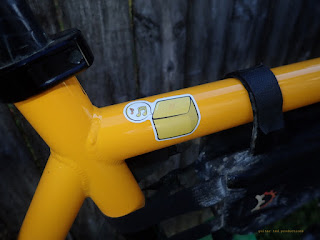 So far, I only have tried out some narrower wheels and tires. next will be the fenders. Then I'll see how the 650B wheels sit with those. If it all goes as planned I think this bike might see a fair amount of use this Winter.

I do have a set of 45NRTH 700c X 40 studded tires which I think will go on the BMC after the fenders are gone. Then that bike could be the freeze-melt-re-freeze commuter rig or the bike I use when it snows some- but not enough to warrant a fat bike.

I also have a thought about what to do with my Karate Monkey. It currently sits with rim brakes, but I think those days are numbered and it will return back to a disc brake bike again so I can use some big, wide rims I have with some big, fat 29"er tires I have and that can be for snow-packed gravel road riding, if that happens.

See, I have several bicycles, I may as well use them for stuff. Besides the fat bikes mentioned, the other three are all single speed drive trains which means I won't be roaching my precious geared set ups over the wet, snowy, icy Winter months. And if this whole Winter pans out to be a dry, cold dud of a Winter? Then I have had some fun dinking around with bicycles. No big deal....

Greets GT,...did I ever tell you about the time we did rink racing on 26” wheeled bikes (with studded tires) during hockey game half-time—here in Florida.