Another Word On The Classics

At the beginning of October I gave my impressions of the American Classic 700 X 40mm Wentworth tires which I had purchased to check out and review. (Yes, I paid for these tires) I should say that American Classic is not sponsoring this post, nor are they aware of what I am writing here. to my knowledge.

Okay, I have come to some conclusions and also, I have been made aware of some information regarding these tires since I am also reviewing this model in its larger size for RidingGravel.com. (Note- I did not pay for those tires and the Standard Disclaimer does apply there. Since I will be referencing those tires here, I thought I'd mention that.)

Alright then, with all that out of the way, let's look at some things I have learned along the way about American Classic tires in general. First of all, my measurements after mounting both the Wentworth models, which came up significantly short of what American Classic was claiming, caught the attention of the marketing guy at the agency which was dealing with me on the 700 X 50 Wentworth review. Apparently, from what I was told, there was a batch of 700c X 40mm tires from American Classic from across their range of models which were, for some reason, undersized. I was informed that American Classic was aware of the issue and that they had taken actions to rectify those issues. This did not, however, cover the 700 X 50mm Wentworths and I was told that there would be an inquiry into that, but as of now, I have no word on this back from my contact.

So, in the meantime some commenters here and on Riding Gravel's various social and web presences have informed me that their American Classic tires are true to measure out of the gate. So, I am left to assume that (a) American Classic did rectify the situation and that going forward you can expect consistently 'right-sized' tires, or that (b) American Classic tires are inconsistent in terms of sizing due to manufacturing/materials issues in light of cost or some other decisions made on the maker's end. Which it is will be found out over time. I hope it is "a" and not "b". But I do not know. All I know is that out of the six tires I have handled from American Classic across three models and two different sizes that all were undersized upon initial mounting. 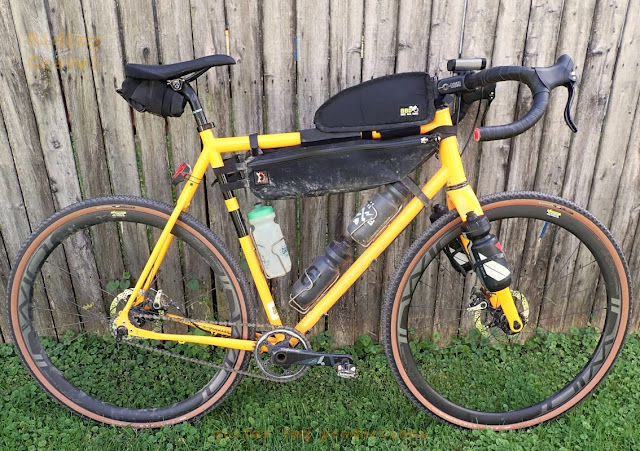 Finally, I also wanted to share that I have found that these tires stretch quite a bit. In fact, now the 700c X (claimed) 40mm Wentworths are actually 39.5mm and 39.7mm now. Still, not quite 40's, but far more acceptable than when I first mounted these and almost 1.2mm wider than they were at the beginning of October. By the way, both measurements were at 40psi.

Just as an aside, the 700 X (supposedly) 50mm Wentworths are still measuring sub-47mm in width, which is really disappointing.

Okay, so how do these ride? Well, refer to my earlier post above. The width and lack of volume on these is a detriment on loose gravel. Smoother, grittier, dirt and limestone surfaces suit this tire much better. At least in this width. The larger Wentworth is actually great on deep, loose gravel. However, both suffer from the same issues and because of these issues, the American Classics would not be amongst my favorite gravel tires.

First up, they weigh more than their counterparts do in the marketplace when you compare apples to apples. In that regard, you maybe could overlook this due to the cheaper price of the American Classic tires. But they also suffer from higher rolling resistance than other tires I have in their class. I found in my back-to-back roll-down tests that the American Classic Wentworths weren't as good at the test as a 700 X 40mm (really a 38mm) WTB Byway tire, and on harder surfaces it was worse than the WTB Vulpine which is a 700 X 36mm (really a 37mm) tire. It wasn't terribly off the mark, but given its weight disadvantage and slightly stiffer ride feel, I would put it behind many tires out there which would perform better and roll freer than these tires do.

But those tires cost more money. So, again- you get what you pay for. The American Classic 700 X 40mm Wentworth tires are what I would call 'pretty good'. A decent tire at $35.00. But if you are thinking it will perform as well, as, or better than tires costing more? Sorry, I hate to disappoint you, but that simply is not the case.

See my full Riding Gravel review on these tires and other stuff at RidingGravel.com

Price point, Price Point, and availability. I think those are the three things on why I am using there 28mm Torchbearer tires. For $70 I can buy two of their tires vs one of another brand. So it goes to what are your intentions with the tires. I think too often we forget about trade offs as consumers.
American Classic, I also assume is re-entering the market and trying to build their brand in a slightly different direction. Last time I saw them was at Land Run in 2015 (I think). If my memory serves correctly they boxed up the business a few years later and I think 2017 sticks in my brain as the year. With that said, I think re-entering in the bike business in the consumable sector as a mid entry tire is very smart on their behalf. There are only so many real racers out there, wanting the rolling resistance perfect.
I will say this on the torchbearer tires I bought. I road them on gravel for about 20 miles with 55PSI tubeless. They held up. I rocked brand new Rene Herse Antelope Wells Endurance casing (55mm) on 1.96 miles of paved shoulders in WNY, and I got a flat. $35 vs $94, the $35 tire lasted way longer and is still tubeless. The other tire is tubed and still alive as well, but I know in its heart, it rolls with a sad face.