As Trans Iowa got older, technology became sharper and affected many facets of the event. One of the less obvious ways that this happened was in the area of weather forecasting. I've talked about this before, how back in the earlier days of T.I. we may not have known what was going to happen with much certainty in regard to the weather. This became less uncertain as the years went by and it really had a dramatic effect upon the roster for the 13th Trans Iowa.

The forecast was looking pretty dire. Rain, cold, wind, and not much relief from that for the entire weekend was the word starting about ten days away from the event. Of course, many times these forecasts get moderated and sometimes even reversed, but not in this case. The dire forecast was solidified by mid-week, and it was reflected in many last minute drop-outs.

Roster attrition wasn't an unknown to me. I expected that to some degree, and I actually looked forward to having a smaller field most years. Less folks to worry about. But I did not want to see drop outs after April because by this time I was doing things that, once I started them, meant that numbers were locked in and anyone bailing out on the event after April started was a representation of a wasted effort by myself for them. 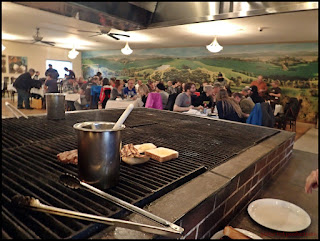 So, for this particular Trans Iowa I had seen the roster drop from the initial 120 to 93 by mid-April. That felt right to me. Then that forecast was put out and drops came on again with varying excuses. I even had no-shows which only added to my frustrations. By the time the pre-race meeting was over I was down to 75 riders. That's eighteen people who pretty much represented a big waste of energy and time on my- and others- part. This did not sit well with me at all. Added to my emotional state due to familial troubles and preparation for Trans Iowa, which was complicated and stressful, this resulted in my being pretty angry, truth be told.

This was a reminder for me of the T.I.v3 no-show problems and if you recall, I was all about stopping Trans Iowa after that event. Back then, the only person the no-shows affected was me, but now? I had people paying money and spending time to make Trans Iowa better, and these people didn't show up? I had troubles- both with family and with the event, but I was committed, and yet some people weren't coming because of a rainy forecast? Yeah.... That was a bad, bad deal that year for me.

I was stressed, now I was angry, and I had to bury that for the folks that actually did bother to show up. The pre-race was started. Someone asked me if I wanted a beer and I asked what was on tap. I chose a Peace Tree Blonde Fatale. No big reason to add this to the tale except that a Peace Tree Bonde Fatale is 8% and either someone was putting these on their tab, or the venue didn't care, but I was never charged and I ended the night having about eight pints.

I guess I had been through enough and decided to fling all care to the wind, or something. I don't really know, but I got pretty drunk that night, and I am sure that if you were there at that meeting you could tell. Frankly, at that time I couldn't have cared less what anyone thought. I had stuffed down too much emotion and I was at my limits.

That wasn't the end of emotional rollercoastering either. After the meeting I got an e-mail from my event photographer, Wally. He had to beat a trail back home due to the condition of his wife and his concern that she wasn't answering the phone. So, not only was I now concerned for a friend, I had no event photographer either.

With all that had happened over the previous two weeks, it all did not prevent Trans Iowa from roaring back to life. Everything was set to go, and if I could have stepped outside of myself, maybe I could have seen that with clearer vision. Trans Iowa was a pretty well-oiled machine by this point. Good thing too. I would be in no condition to run things very well at all for quite a few hours into the event.

Next: Red Skies and Red Eyes