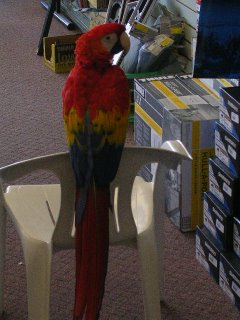 Meet Beaker, an exotic bird that belongs to a customer of the shop. The brightly colored bird was quite content to perch here and preen it's feathers while it's master shopped.

The really cool thing about this was how the man that owns her came to be in possesion of the bird. It was a rescue. He said he went to a party where a couple of gals lived. Apparently they had purchased the bird that very day. He said he walked out onto a balcony where he observed the two women torturing the bird by holding lighters under its feet! He was so appalled that he took the creature, perched it on his shoulder for the rest of the evening, and decided to take it with him when he left, rather than to leave it to be tortured by the two women.

He said that the next morning, he called the local animal shelter, and related the story. He was told to go ahead and keep the bird, and that the animal shelter people would be visiting the two women to confiscate there dog as well! Crazy!

Beaker is safe today because this customer had not only a conscience, but the willingness to take action. Kudos! Today, Beaker and his owner are in their big rig on their way to Houston, Texas. Say hi, if you see them on the freeway!

I normally don't get off topic like this, but it's not everday you see an exotic bird in Iowa, nor do you hear such stories. Enjoy!
Posted by Guitar Ted at 9:53 AM