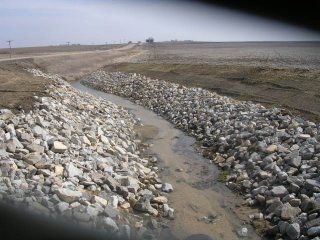 While it was a beautiful spring-like day in Iowa, it was a bit decieving. March in Iowa means wind. Powerful wind.


Here we have a couple of shots from the ride. Nothing spectacular. One showing that we have got enough rain lately to cause lots of run-off in the fields. The gravel was soft in alot of places. 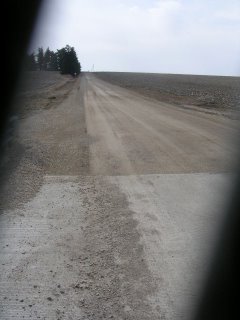 The other shot is showing one of the several one-third to half mile long climbs that come one after another on this south of town route. Kerkove says these hills are nothing. Well, add in a nearly constant 25mph wind right in your face, and I'd say that they are plenty steep! You know the wind is blowing hard when you have to pedal to maintain 12mph. on the downhill side of these grades!


Nothing really spectacular to report other than my legs are fried. Major burning! I went straight into this wind until I couldn't climb anymore above 8mph near the end. That was it! Kaput! I thought about resting a little, but I did have to pedal home yet. I also didn't want to do any damage to my body, just because I wanted to go on, so around I went. I got to actually coast for the first time in an hour and a half of riding! Now there's an idea! I did try some of that Recover-Ease stuff Jeff gave me as a sample. So far, no pain, but the legs are like lead right now.

Well, here's hoping your ride was enjoyable. Maybe I'll spin around tomorrow to loosen up the legs a little. Have a great weekend!
Posted by Guitar Ted at 10:01 PM