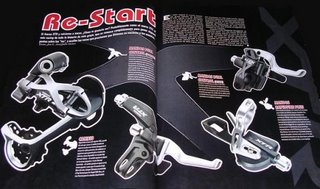 Shimano's new XTR designs make their "debut".
If you haven't seen it yet, here are the pictures of Shimanos new XTR gruppo......at least some of it.


This was grabbed from Litebikes site and is apparently a foreign publication, because I can't make out the language. At least the pictures are a little clearer than the Shimano release that's also shown, below. 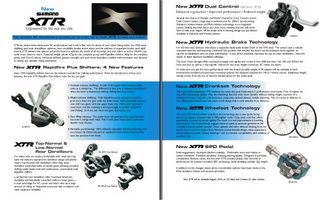 Here is the "official" brochure we got at the shop yesterday. Our first reaction was, "Gee, it looks like SRAM!" Followed by, "That's the ugliest lever I've ever seen!" in regards to the Dual Control lever in the upper right of the picture.


My impressions beyond that are these: Shimano has stumbled a bit in the looks department before. Now with the re-design of XTR, they have tried to emulate the SRAM look and have failed miserably. The "X" motif is clunky, contrived, and, dare I say it, ugly. It is reported to be only 129 grams for the rear derailluer, though, so it's got that going for it! The Dual Control lever is absolutely hideous. The Rapid Fire pods com back and improved! Yea! The hydro lever can be purchased separately, double yea! The wheels lose the goofy spoking pattern, which was totally unnecessary for off road bikes. The XTR level spud better have killer bearings with awesome seals, or I don't see the point. It's for all intents and purposes the same design as the current high end SPD pedal. Not that the old design is bad, just that XTR usually meant far better, and lighter than the next step down.

Orbea Alma 29"er due at Sea Otter: The Orbea Alma 29"er is touted as one of the lightest, if not the lightest, 29"er frames to be made available for XC racing in a 29 inch format to date. Also, it's the first widely available carbon fiber 29"er frame. Although that's a bit of a misleading statement because, 1. It's not the "first" carbon fiber 29"er ever, ( Trimble, Calfee...) and 2. It isn't really available, since it's thought that the entire first production run has already been spoken for! Finally, it's only available in a size large, at least for the time being. Other sizes are rumored to be in the works. If the sell through on the first production run is any indication, I'm sure we will see further expansion of the lineup from Orbea. Interestingly, the European market is the motivation for Orbea to produce this frame in a 29 inch format. And here all we have heard is that the Europeans just do not care for 29"ers. Hmm.......

Cannondale 29"er in the works?: Our "Amish" Cannondale representative was at the shop I work at yesterday. (I say he's "Amish" because he said, "No pictures! They steal my soul!") I put forth my theory that the Lefty equipped, hardtail 29"er was already in testing to be realeased in the fall of '06. He didn't have any convincing arguments against that for me. In fact, he didn't really argue the "fact" at all. It's interesting to see that after all the reports of dealer reps canvassing the shops for theoretical 29"er sales figures, and the reports of different shop employess having seen "secret file folders" about a 29"er project that Cannondale is being so tight lipped about the whole affair. Seems almost like reverse psychology, doesn't it? It's as if they are being tight lipped to help fuel the fire of rumors, with the added stoking of the informal poll and "secret file" sightings. Hmm.............maybe I'll just stop talking about that C'dale 29"er then!

A bit more Trans Iowa Recon: I'm doing some "touch up" work on Trans Iowa course recon this weekend. I'm bringing the camera, so perhaps there will be a report filed this weekend some time! I'm taking a bike, so I can combine a little training in with it. Hopefully, tomorrow is as nice as they say it will be!