And You Thought 29"ers Looked Huge! 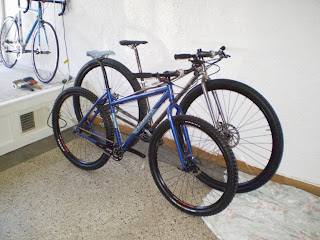 Introducing the 36"er! This is a project that I have been privy to the developement of for a couple of months now. Only now has the designer brought it to the light of day. I have had a hard time keeping a lid on this! It's not my nature to keep things under cover that long!

What you are seeing here is a Trek road bike in the window, a Salsa El Mariachi 29"er in the foreground, and the 36"er in the backround. Notice how the contact points for the Salsa and the 36"er match up. The wheelbase is 4" longer but that's about it.

For more perspective on the design and some reactions go to the 29"er forum at mtbr.com. The designer, Ben who is a friend of mine, has more to say about how it rides.

It's getting some interesting negative comments, which I find reminiscent of what you would find on the 29"er forums back in 2001-2002 concerning 29"ers in relation to 26"ers. Speaking of 29"ers vs. 26"ers, the "big test" being done on cyclingnews.com has a bit of an update to report. (Scroll down the page a bit to find it) Seems as though they are so intent on making everything the same but the wheel diameter that they have lost touch with "reality" in that no body is going to experience riding a 29"er in the way that they have the test set up versus a 26"er. Once again pointing out the futility of trying to determine what is "best", as if that's even a definable parameter when dealing with humans. What I'm trying to say, and have said all along, is that science isn't going to be able to determine what is best for your reality. Too many variables that can not be accounted for. You are your own best "scientist" when it comes to 26"ers vs. 29"ers. Ride yourself and decide.

Another interseting conversation spawning from the experiences at the Arrowhead 135 is taking shape at the Endurance forum on mtbr.com. Check it out and see what you think.

Update on Mr. 24: I heard from him at about 2:00pm yesterday. He was still stuck in the Cedar Rapids airport! He said he had gotten a flight scheduled to get him to Germany by about 6:00 am our time today, so let's hope he's made it okay! That storm really messed up travel for alot of folks!