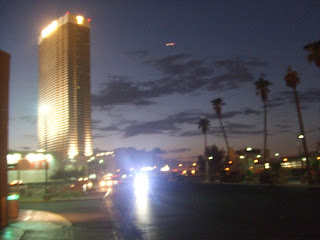 <====The sun setting on my last day in Lost Wages.

I'm back....safe and sound. 36 hours of being awake left me in recovery mode for Saturday night and Sunday. Circumstances being what they were, I chose to be up that long, but hey! Count it up as training for Trans Iowa. It wasn't all that bad!

So, just what were the highlights of the trip? Here's a short list in no particular order.........

Good Plane Rides: Not being a fan of flight, I really appreciated the smooth flights. Hey......that's just me!

Outdoor Demo: Riding bikes is always on top of the list and riding bikes at Bootleg Canyon is really an unusual kind of place to ride for me. One part dust, one part big chunk, and one part gravely rocks, the terrain out there is challenging in a different way than what I am used to riding here. Of course then there are the bikes themselves. Stuff you don't normally get a chance to swing a leg over. As far as I am concerned,Interbike could be five days of Outdoor Demo and nothing else.

Meet The People: Then there are the people. Lots of cool people. Really cool people. More people than you could have great conversations with in a months time. At least I get to catch up a little bit with these folks.

Adventure On The Strip: Riding bikes in a big group down the Strip to the crit races was a lot of fun. Racing home on a 26 inch wheeled Dahon folder single speed was crazy. Dodging traffic was sketchy, but everyone was pretty cool about it at least.

Meeting The "GF": On the first day of the indoor show I caught up with Gary Fisher for a bit. It's interesting to have a conversation with him that doesn't have anything to do with bicycles. For one thing, I found out he is a bass player, which I thought was pretty cool for obvious reasons. Hey! I ain't Guitar Ted fer nuthin' ya know! Then I met another "GF", as in "girl friend". Sonya is "J-Koves" girl friend, (GASP! Yes....I said it!) and she is a most delightful, smart, and attractive young lady. Definitely a highlight of my trip right there.

So there are the highlights I can remember off the top of my head right now. I'm sure there are some things that I missed, but chalk that up to a foggy mind still reeling from being awake too many hours in a row. At least I had a little help staying awake all that time. Niner Bikes put there press kit on a i-pod Nano. So, I downloaded a bunch of tunes to pass the time on the jet, which helped a ton. Thanks Niner! That was awesome!