Under The Shadows of the South Side Woods 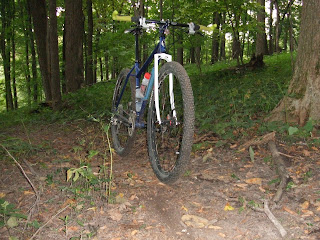 <===The Rawland Fork on the El Mariachi

I got a chance to head out to the woods again Sunday late in the afternoon. I decided to give this new Rawland fork a whirl that is on the front of my El Mariachi.

What a difference a day makes out on the trails, by the way. I think about a dozen folks had ridden out ahead of me and the trails were packed down and fast! That made me go out a bit to hard right outta the box, so I had to slow it down a tad during my first lap. It's hard to not go as fast as you can when the trails are this fast and tacky in the corners. Once I calmed down i was much better off. I had one pretty spectacular "near biff", but I managed to pull out of it with only one foot unclipped. 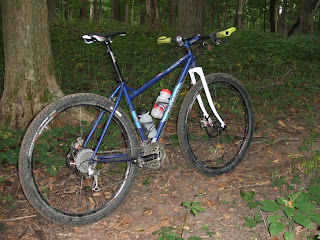 <===This fork is a real surprise. It's not quite what you might think!

So a first lap was completed with both the outer loop and Captain Bob's Berm Trail done. I swung back in for another go 'round when I noticed that it was getting dark. Real dark! It was only 5:00pm, so it shouldn't be this dark, I'm thinking, but it was. So dark that in some places it would have been nice to have a light. I couldn't see the trail very well!

Then I heard the wind come up. Oh oh! Rain! I started pumping the pedals harder and when I came out on the double track, I went back into the Outer Loop instead of taking Captain Bob's so I would get back to the car sooner. The darkness lifted a bit to the point where there was this eerie half light. Kind of a spooky, weird atmosphere in the woods. Deer were skittering around everywhere. A shotgun could be heard being discharged in the distance. Several shots over the period of my loop. Rain came down and made that unmistakable noise on the canopy above my head. Nary a drop hit the trail as far as I could tell though.

I finished out the loop and headed for my car only to find that instead of loading up in the rain, the shower had passed on and the sunlight was filtered through rushing clouds. I decided to go back in and get Captain Bob's Berm Trail in, since I missed it. I found five deer immediately and then they scattered. At different points during my ride deer would be running across my path, distracting me and making me think about a potential collision. The gun shots in the distance probably had them all in a dither too. Whatever it was, it was kaos in the making.

Now you're probably wondering about that fork, huh? Well, it rides really nicely. Not at all flexy, like I thought it might be. Just a great steel fork ride, really. Reminded me a lot of my Willits fork and other "old skool" steel rigid forks I've ridden off road. I wouldn't recommend it for crazy rock infested terrain or for All Mountain or anything like that, but if you ride XC and single track is your deal, this fork is a nice little stylish piece that would suit a steel frame quite well, I think.

I'll have to give it some more trail time to see if I'm still feeling the same way about it later on, but for now, I'm impressed. It's a nice fork for sure.
Posted by Guitar Ted at 5:39 AM