Interbike starts to wear at you after awhile, so today I decided to give myself a self imposed break and join up with the Ergon crowd and relax. It was a great time!

The theme was Oktoberfest, so the "booth babes" were all in traditional Barvarian dress, and one of them I got a chance to know just a wee bit. No........not that way! I am a decent guy, no matter how it may appear on the outside. 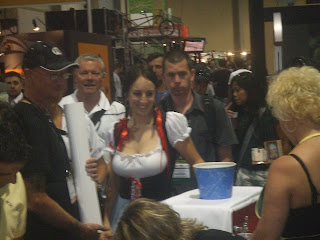 So besides all of the cool people at the Ergon booth, folks like Dave Weins, Namrita and Eddie O'Dea, and D.J. Birtch, I got to meet Sonya finally. Okay, I could say alot, but I won't, because I'd spoil the pleasant surprise ya'all would get. That's all I'm gonna say here. Let's leave things at this: It was a definite highlight of my day. Mmmmkay? 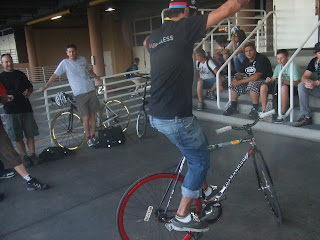 Then the show closed and I was supposed to ride to the Mandalay Bay Resort on a Dahon folder from the Sands Convention Expo. It was part of Commute By Bike's sponsorship of the SocialRide. So while we waited, an Alley Kat was going to start from the Sands too, and we were entertained by L.A. Brakeless. Those fixie tricks are pretty cool! 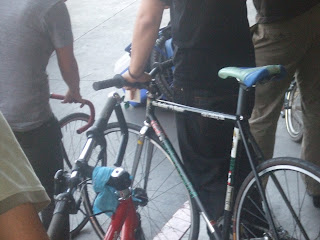 <===Check out the super narrow bars these guys prefer.

After that we got out on the Strip and rode about five miles to the Mandalay Bay resort where the crit races were being held. It was pretty funny seeing the peoples faces as we rolled by. Some gave us cheers, and some cars honked in appreciation, but most were flabbergasted that anyone would have the gall to ride down the Strip "en-masse" on bicycles. I'm sure ol' Blue Eyes himself would've sneered through the smoky haze of his heater dangling from his slightly opened lips as we rolled past the Frontier Club. 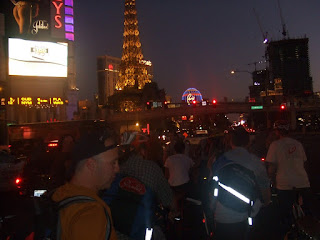 We made it out there okay, enjoyed a bit of the racing, and then Fritz, Tim, and I rode back alone. Okay.......Here's the deal folks. I don't condone this sort of thing, nor do I endorse it, but we had a hoot doing it. We rode like the wind down the Strip without helmets, and without lights. I would tell you that you were an idiot for doing it, so yeah, I know! But it is what it is, and it was an epic night for sure.

So tomorrow is it. The Last Day. Then I pack it in, leave for the airport, and fly home early Saturday morning. I can't wait to get home, but I had an adventure here that I won't soon forget either.

I hope ya'all get out and make your own adventures this weekend! Next time you hear from me, I should be home. It'll be good!
Posted by Guitar Ted at 2:03 AM