Trans Iowa V5: On My Mind 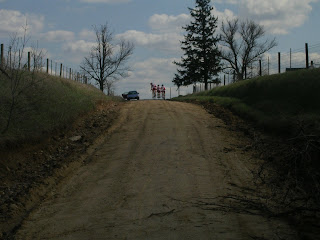 Lately I've gotten a spurt to do some more work on Trans Iowa v5 in the form of finalizing the course choice. I want to make a concerted effort to close out that chapter of prepping for the event by sometime before the end of November.
This edition of T.I. will be the first that I have split the duties of doing the course planning and it is going well. d.p., who came on board last year as co-conspirator, has been enthusiastically reconning and laying out about half of what will become the T.I.V5 course. He's even ridden a bunch of it on his bike! He's beaten me to the punch, so to speak, and I have to get some work done! Actually, it is really working out quite well.
d.p. is finding out, as I have, that actual physical recon is worth gold when doing this sort of an event planning. Maps can only tell you so much, and many times, they can't be trusted. But what isn't possible to convey are the cultural, natural, and mental aspects that a course choice can have.
For instance, T.I. courses in the past have been routed in such a way as to give folks a little cultural flavor. (Not that anyone would notice, after beating themselves silly in late April weather on miles of bumpy gravel roads!) But hey! I always tried to make things interesting, if I could. d.p. and I are continuing that tradition. Then you have the unknowns like dogs. That hasn't been much of an issue in the past, but d.p. is actually re-routing his part of the course at one point to avoid some particularly nasty dogs. Then there are your B level maintenance roads. Some of these are almost ordinary in appearance, while some are downright dangerous, or so primitive that they barely exist as a road at all. These sorts of things one has to actually go see to make any sort of judgement call on.
Finally, the sum of all the parts has to be considered. I know this might seem out of character for me to some of you, but I have actually altered the course on occasion because I felt that the course was too mentally and physically difficult in places. Yes, really! I know that some will find that hard to believe. I do try to throw some crazy stuff at the T.I. folks, but I am not here to make it impossible. It is a hard act to balance. I don't think I've hit it right yet, and of course, the weather has a lot to do with that as well.
Ah yes! The weather factor! That is the final piece of the puzzle to consider. Over time, I (and now d.p. as well) have been getting more and more careful about how we design the course in light of the weather. A big turn was taken after T.I.V2 when I had too many B road sections all packed together. That combined with lots of rain didn't go over too well. Had it been dry, well, that wouldn't have been a lesson learned. Last spring, T.I.V4 was another slap to the face. Low water crossings, areas subject to flooding, and leaving ourselves some bail out possibilities for re-routing were all drilled into our heads as things needing consideration. The weather has taught us some hard lessons!
So, this Trans Iowa thing gets more complex the more we know. I think back to the first one. I just picked out a route on paper, Jeff and I drove it, made a few alterations on the fly, and lived with it. It's amazing that one came off at all on so many levels!
Ignorance is bliss, I guess!
Posted by Guitar Ted at 6:07 AM