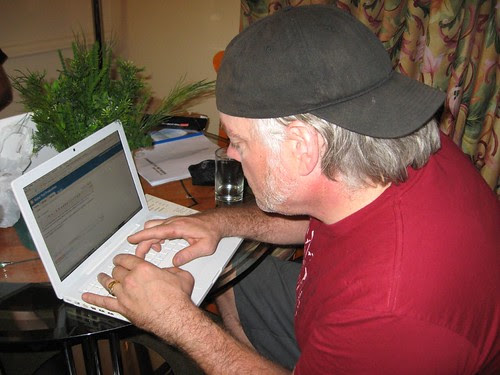 <===Ever wonder what it's like to be me in Vegas? (Photo credit: Richard Masoner)

Typing the screed here in Vegas is getting me nowhere but hungry and cranky. Well, I did meet some pretty cool folks. I met the owner of a factory in Taiwan that said he wasn't afraid of Shimano, (Yeah! Fight the man!), and I met some people that are making some pretty cool new high end bits for bicycles that are behind the scenes in different areas of the bicycling world.

I met the guy who basically is responsible for the term "twenty niner" and the guy responsible for the numerical descriptor, "29"er". Wes Williams is the undisputed "Dude" of the 29"er world. It was pretty much his enthusiasm for the big wheels off road that infected a few important peers and got the 29 inch Nanoraptor into production about ten years ago. Wes was using the "28er" moniker previous to that big tire and when they came along, well....29er was the next logical step in the name game. That eneded up becoming "29"er" when another man, Bob Poor saw that "29er" was a yachting term and wanted to step things away from that. An important thing in the day of the computer.

But yaeh, I was pretty edgy. It's just that I'm so busy, I didn't eat anything between the time the show opened and when it ended. Then I had two slices of pizza and a side of pasta. Ha! Fuel for the show, but that was to be expected.

Well, I suppose I shouldn't have said I was "cranky", just low on blood sugar!

Lance is in town racing a cross bike.Hmm...........what if he doesn't win? Or what if he cracks up on a barrier? Could happen. (Late edit: He's fine. He got whooped by about twenty other dudes.)