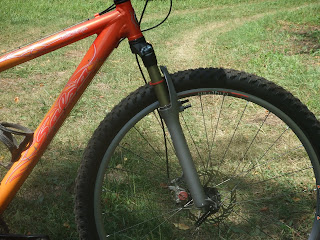 I'm still doing this nutty fork swapping business that I started back in July. I have posted some thoughts about the process before, but I thought I would update where my mind has been at with this now, as I get closer to drawing this experiment to a close.

First of all, this idea was a brilliant idea to get me to ride more. Really! I needed a motivation to get out and do something that excited me, not unlike some of you that race out there. Since getting to a race is pretty tough for me with my family and schedule, the fork experiment has been a great way to basically do what prepping for a big event has done for some of you.

Not only that, but my bike was a different bike every time out. Kind of like getting to ride something new every ride. This may not appeal to some of you folks that like to limit the variables, but I seem to be a bit different in that regard. Heck, I couldn't ever do the two step either. Why do the same thing over and over again when you could do the pogo and thrash all at the same time? (Yeah.....I know! I don't need to convince some of you out there that I am truly a bit odd!)

Getting back to the fork thing, I wrote this just recently on a thread on mtbr.com : "In the end, most combinations are immanently ride able and most of us would be able to handle the bike with whatever geometry we want to consider. Whether it fits an individuals style and how a bike should handle in their mind is going to vary quite a bit from person to person.

That is what I think is great about today versus five years ago. Back then, you were stuck in a box handling-wise, only being able to vary how a bike rode incrementally with a head angle change. Now you can have it spicy or mild, or anywhere in between. I love it and it opens up a whole different set of perspectives on what a good handling bike really is."
__________________

So this is what is really cool about all of this fork offset nonsense; you don't have to be stuck with a twenty nine inch wheeled bicycle that doesn't quite suit your expectations in handling. You just might be able to tweak it to squeeze out a different sort of handling than you thought possible.

Now you won't be able to do that every time, depending upon the bikes original geometry, and whether or not you prefer a suspension fork or not. However; in a lot of cases you could, and the bicycle that you have might not need to be replaced, it just might need to have its handling tuned. It is cheaper to buy a fork in most cases than an entirely new bicycle in terms of 29"ers. Don't be afraid to try it! If you are one of those that is thinking you might "screw something up" by throwing on that 46mm offset fork, don't be! Chances are you will get along with it fine, the bike will be rideable, and nothing bad will happen in your world because of this. It still will be a bicycle, and you just might like it better.

Hey, if you swap your fork out and it gets you to ride more because you really like the change, it's a good thing, no? 29"ers offer their riders that opportunity. Check it out!