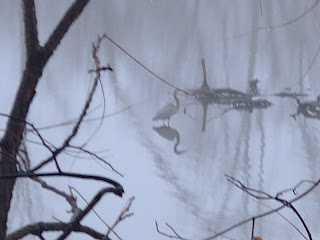 <===A Great Blue Heron stalking in the backwaters.

My old co-worker A-Lo was back in town for a friends wedding this weekend and wanted to hook up for a gravel ride. I missed the last one he was back for. Not this time!

I was planning on some T.I.V6 recon with d.p., but I invited him to come along instead. So, if the T.I.V6 recon gets balled up, you can point back to this day and say, "ah ha!" Oh well, it probably won't affect that, and it was too nice a day to not be out on a bicycle. I mean, this late into November and to have close to 50 degrees? Yeah.........recon can wait!! 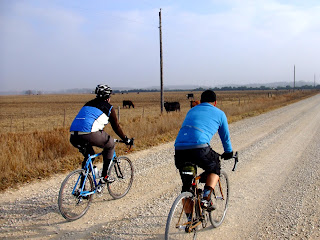 The ride started out for me at my house. I had to traverse Waterloo and Cedar Falls to get to Bike Tech where the ride was to set off from. It was chilly and pretty dang foggy. I was almost tempted to put lights on, but the forecast called for clearing skies, so I took my chances.

I got over there just in time and there were three others besides me. A-Lo, d.p., and mtbidwell were there. After some futzing around with my air pressure with a pump borrowed from The Thin Man, we were off. It was decided to go around Big Woods Lake, then head over to Ford Road, and wherever we wanted after that. 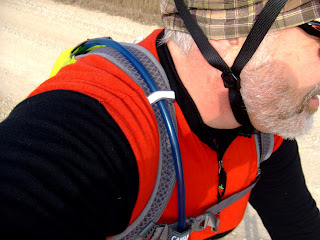 The ride didn't get very far when we heard this awful screeching, scratching noise. It was emanating from mtbidwell's rig. His Coda front hub shat out it's bearings and was dying a horrible death. He had to bail out, so we bid him adieu.

Not 50 feet later, I realized my rear tubeless tire was squishy. It was going flat, and the sealant was dried up. So, out came the tube and pump. After a tube install and huff up session with the excellent Lezyne pump, I was good to go. Yes Tubes! WooHoo! 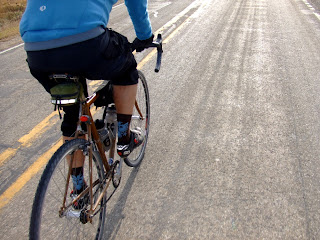 d.p. was sportin' the War Axe eagle on his legs!

After this there was no stopping us. We went north, east, north, west, north, and then ended up in Janesville where the requisite convenience store stop was made.

After a bit of refueling we took off again westwards. Trouble is, everything west and south of Janesville is pretty much pavement. We wandered around searching for limestone goodness, but were coming up empty handed. Heading westwards toward New Hartford would have solved our dilemma, but A-Lo had time constraints, and with me spinning a 34X18 on my El Mariachi with monster truck tires against two cyclo-cross rigs, it was not making me want to find a longer route either. 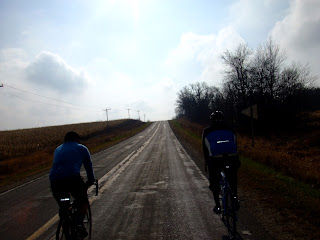 Gravelly Glory. It's up ahead and to the left.....

Eventually we made it back to Ford Road and went against a stiff southerly headwind back into Cedar Falls. I dropped off A-Lo and d.p. and made my way slowly and steadily back to my house in Waterloo.

It was a fantastic day out on a bike, but after three hours of ride time spinning like a whirling dervish and working those big meats, my legs were cooked!

It's all good though! I hope everyone had a great weekend and got to ride a bicycle.
Posted by Guitar Ted at 7:38 PM