News Flash: On One Carbon Fatty? 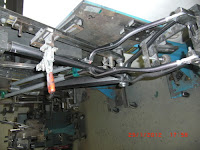 I don't know anything more about this, but I just saw the link to the Shed Fire site, which is On One designer Brant Richards place to dump all of his behind the scenes bike stuff.

He lists this as the "carbon One One fatty". That would indicate to me that this is destined for production. 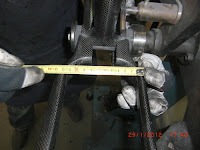 While not the first carbon fat bike frame produced, it would be the first produced in any sort of meaningful numbers, and I am sure, it will titillate those who are seeking to cut weight and have stiffness in their fat bike frame sets.
I would surmise this will follow the same geometry the original aluminum Fatty has which is purportedly more attuned to mountain biking than it is pure soft surface/snow/sand riding.

Carbon fiber: What don't they make outta this stuff! 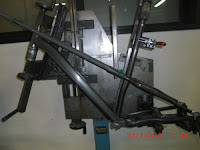 By the way, the images were pinched from the Shed Fire site. I have no horse in that race, just thought it was pretty interesting. Enjoy!

Update: The On One "blog" has now posted new info on this special one off frame. They are not saying it won't be offered as a production bike, but they are not saying it will be for certain either. At any rate, see the details here. The estimated MSRP is going to make this the most expensive fat bike option, if it is one, at $3250.00USD
Posted by Guitar Ted at 2:35 PM

Labels: fat bike, On One

if they are going to mass-produce it it will be the first carbon fatbike to actually take advantage of the material so far as weight reduction goes... very interesting!

Made by Sarto? That is pretty cool. GT, if you don't mind, could you tell me the lenght of your seatpost to bar or seat tip to bar? On the Mukluk or other rigid-non-drop bikes?

@john pitwo: On bikes I set up for myself I use 28.5" from the point where the seat post intersects the saddle to the center of the handlebar.