Welcome to the first Friday News And Views of 2013. This one will be pretty fat bike heavy! Tis the season. Here we go...

In the Winter, many folks want to test their fat bikes on the snow. Many of you out there may be first time fat bikers or may be curious seekers that are  trying to figure this out to see if fat biking is for you. If you get nothing else from this, keep in mind, if you can't ride through snow/sand, let more air out of your rear tire!

Of course, like anything else, it is a bit more complex than this, but hang on.... It is easy to figure out what to do. The secret to optimum air pressure for any tough, loose condition is as easy as using your fingers and eyes. I would assume that if you are a cyclist, you most likely have command over the use of both of these functions.

This isn't my secret, but it was passed along by one of the most experienced fat biker's on Planet Earth, Mike Curiak. He passed this on via the fat bike forum on mtbr.com, and I have pretty much verified his advice via my personal experience. Here's what you do:

Front tire? You can usually get away with more pressure here, and it will be important that you maintain a pressure high enough that steering is not adversely affected. Experimentation will be necessary, but I typically leave about 1-2psi more in the front. Maybe more if there is a lot of hard pack "in between" the softer stuff. You'll know if the front gets too low because the tire will  get to become self-steering more.

In cases where the snow is deep, loose, and shifty, you may even find going lower yet is better. I did this recently. I was at "one wrinkle", but the stuff was still giving me fits. I got off the bike, opened the Presta Valve, and tapped it three times: hiss, hiss, hiss- and closed it off, re-mounted, and what do you know? I was going right on forward like it was no big deal.

How much did I change the air pressure? Heck- I don't have a gauge that accurate to know, but it wasn't by much. However; in terms of "go-no-go" it was a huge difference. Now I was riding through stuff that only a minute ago I could barely make headway on. The result was air pressure so low that when I hit pavement I was bouncing on every pedal stroke. I stopped and aired up with 75 strokes of my Topeak mini-pump. That made a difference, but when I got home, the air pressure reading I got on my "base" measuring pump was something below 5psi! So when I had it low enough to get me through that wicked, loose snow, I bet I was waaaay down there! I do recall that I could almost bottom the tire out by leaning hard into it with the palm of my hand, so it was at a very low psi. But again- you do what ya gotta do to get through. Then air up.

Try that on your next fat bike ride in loose or fresh snow. 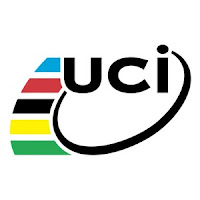 So, you want to race here?

In another stunner, the UCI has a rule that states you can not race in events that either the UCI, or apparently, USAC does not sanction. (Read the Velo story on particulars related to this here.) If you do, you can be fined, according to their rules in place now.

So, why should you care? Maybe you are a gravel grinder kind of guy and this doesn't pertain to you. Or does it? Let's say you sign up to do a few early season crits, then to get into shape, you do a gravel grinder, unsanctioned, of course, and run afoul of this rule. Maybe you are a mountain biker, and you do gravel events, or an event that isn't on the USAC calendar. Could you be at risk?

Now while it may seem far fetched that USAC or the UCI would crack down on local or regional Cat 1, 2, or 3's, it would seem apparent that the cycling federations could if they wanted to.

And this isn't anything new, but it does seem rather Draconian. In fact,other racing series, (notably NASCAR), tried doing this as well. I can see why a racing series that relies on its star drivers, or core performers, to put butts in the stadium seats, would want to keep the congregation inside its church walls. However; USAC and the UCI can hardly claim that they are losing sales to "rival races" or series because they don't have fans in the seats. They might be afraid you won't choose their events to ride in though, and with the slew of "free, grassroots" gravel races cropping up and getting a lot of attention with big numbers now, the UCI and USAC may just start taking notice here.

Or maybe not. Either way, it is interesting to note that amongst mountain bike racers I have seen commenting on this, unless they are Pro, sponsored athletes, the majority seem to be thumbing their noses at USAC. So, tell me- "Just how does this help grass roots racing and raise up a new, enthusiastic, larger core of riders under the UCI/USAC banner?" I'll tell you what....it doesn't.

And most gravel grinder guys and gals probably won't care. Oh......right then.

Hope everyone has a great weekend and maybe you'll get outside to sled, ski, or ride a bicycle.
Posted by Guitar Ted at 1:30 AM

I was surprised to find that the lower-pressure-is-better rule does NOT apply to standard width 29er rear tires, in my experience. I recently went on my first snow ride of the season with my fat front Jones, Larry on 50mm front, 2.4 Ardent on Gordo rear. I found that both on packed snow and in the deep loose stuff, I got lots of squirm, terrible traction, and exponential rolling resistance from dropping pressure in my rear tire. When I re-added pressure, it rolled much faster and hooked up so much better. I haven't ridden a full fat bike yet, so I'm not trying to discredit your advice here, I just wanted to share my experience with the half-fatties out there. Probably because the narrower rear digs down to find traction rather than floating on the snow.
Interestingly, I should add that I have not found a situation where I DID like low pressure in the Ardent, in any season. Maybe it's just this tire? Or maybe it's just me? Although I haven't used a Rampage in a few years, I remember enjoying those more at lower pressures. I should also point out that I do not own a gauge, just go by my "squeeze the sidewall" test, but I doubt if I've ever run a tire at more than 25-30 psi for any duration outside of testing.

@A.B. My previous to fat bike snow riding was done on Ardent 2.4's tubeless on Velocity P-35's, (similar width to Gordos), and I often ran 15-20psi as the best solution for traction/float with that set up on snow.

Most 29"er tires have a "sweet spot" which is casing construction dependent and rim/tube/tubeless dependent. So, with that in mind, I rarely find a 29"er tire set up that allows good performance under 20psi. (Aforementioned set up and Geax Gato TNT's Both on 35mm rims, by the way. Also WTB Dissents tubed.)

Fatbike tires are a totally different league, and used in the intended environments, (ie: snow, sand, mud), their tires can and should be used at ridiculously low pressures. As a data point, I never go above 10psi on my fat bikes for any terrain. Even pavement.

I also will reiterate that the original inspiration for the post was Mike Curiak, who arguably has more miles on a fat bike on snow than any other individual on the planet. He should be considered an expert on such matters, and as such, I passed the info on. Personally I have found it to be spot on.

@GT Yeah, I wasn't trying to steer your readers away from your advice, I just made the mistake of assuming that lowering the pressure worked for fatties, so why not 29ers? I don't claim to even be in the same realm of experience to give advice as M.C., just hoping to help snow-newbs like myself avoid making the same mistakes.
(Although the only way we really learn is by making the non-life-threatening mistakes ourselves, right?) ;)

The UCI/USAC has been stifling the growth of cycling for years; preventing incremental technology advancements to trickle in, entry level participation, and the basic overall enjoyment of our sport... they are out of control, even going as far as to limit the clothes we wear, how we position our bodies on the bike, and now what events riders may participate in!

It will take MAJOR changes at this organization to turn things around, and I’m sorry to say, but I think I may just boycott all of their races from this point forward, besides my beard may not be UCI sanctioned due to its aerodynamic and warmth characteristics, thus giving me an unfair advantage over the younger racers who are unable to grow such a magnificent example of manliness.

Lance, agreed on all counts. I was 95% sure no license would be purchased this year by myself already.

Mark, I almost always run lower pressure on the front of my fat bike. There simply is less weight up there for it to support. It makes a big difference in handling and such. Like you, I don't know PSI.

Where would one expect to see the "Wrinkle"?

I only use a fat front, and I don't ride in snow. I'm usually at about 8.5psi, but interested in this trick anyway.

@jkiefer: Right in front of, and behind where the tire meets the surface. You'll see the wrinkle in the sidewall. (Think top fuel drag slick, and it may help you visualize this.)

Mark,
My comment has nothing to do with today's post. I have a concern about all these new rides popping up with the clear message that if you dont have A SUPPORT CREW, DONT SHOW UP. 8 years ago I drove to kansas for the first DK. I dont remember anyone having a support crew. It was understood that if someone needed help you helped them. If you needecd help, someone would help you. We did not have support crews, we supported each other. Are we losing that? Something worth discussing?
Pete
Jvillebikerhotmail.com

@jvillebiker: (Pete)- I was at the first DK as well. Things were a lot different back then!

You know, I think that is a great post that I could comment on in a full blog entry. Look for something on that soon.

Huh...looks like a lot of Gravel grinders just turned into "rides" ;)