As a few folks guessed the other day, the new frame is an On One Inbred, but it isn't just any ol' On One either. This one, (so the website says), is from a limited edition of single speed specific frames On One had done. Yep! No derailleur thing-a-ma-bobs on this one! Not ever!

Well, I think if you have read this blog for a while, you understand that I like single speed 29"ers. So, the fact that I went for a single speed specific frame probably doesn't surprise you. However; some may wonder why a person wouldn't want a frame with some versatility. Fair question....

I think it boils down to two things for me, at any rate, and those things would be aesthetics and simplicity.

The single speed capable frames generally are just fine for most folks, and probably a smarter buy. I mean, let's say you love the bike, but you are going to go bike packing in the Rockies. Well, if you could put gears on that bike, you probably would be a wise individual to do so. I don't know that I am all that wise, but for me, the looks of a bike frame without the "extra" braze ons when it is set up single speed is better. Yes- I am picky that way, I suppose you could say. Yes- I can't see those extra braze ons when I ride. Oh well.......chalk it up to vanity, or whatever. I just like that it doesn't have extra gee-gaws hanging there that I'll never use.

The second thing- simplicity- is what single speeding is all about. Just get on and pedal. I don't have to think about shifting, just when I pedal, when I don't pedal, and how hard to pedal when I do pedal. See- that's keeping things to the basics. I like that sometimes.

The next thing one might ask is why On One? That's another great question, and I've hinted at the answer before here.

On One has made a single speedable 29"er frame for several years now. I had one of the first run of production frames with the mini-slider drop outs. While the mechanism for the sliders was a bit fiddly and would slip sometimes, I managed to get mine to stay put over the course of time that I had it. So, although that design morphed into a beefier slider, and then a slot design and a modular option over the years, it was the original design that hooked me with its ride feel. I really missed that frame after selling it to a former co-worker, and so it looks like he'll never sell it back to me, (smart guy!), which necessitated action on my part.

The action came recently when I saw that On One had discounted this frame a bit, and I jumped on-line and grabbed one. It has a fork end design now, (some call 'em "track ends"), and with the slotted brake mount, it should work just fine. I'll probably use a chain tug just for some insurance.

The older On One also did not have the brake mounted to the chain stay, as this newer design does. This new mount, an integral part of the fork end, is beefy and should provide for quieter, more solid feeling braking. It also makes the chain stay tubing have asymmetrical lengths/shape, and I am not sure how, or if that might affect ride feel at this point. 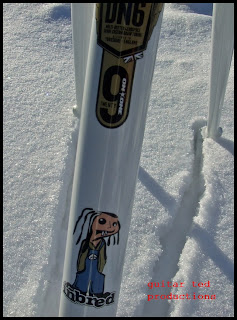 So, beyond that, this frame is nearly identical to my older On One Inbred. No fancy head tube dimensions, no odd-ball bottom bracket standards here. Just good, simple, proven design that should be no problem down the trail for me.

The one thing that I am not sure of is the head angle, and I haven't dug into this yet, but it seems that my old On One was a 72° head angle while this is listed as a 71° head angle bike. It could be simply a different fork dimension that the angles were based off of, or that the head angle is actually slacked out a degree. Whatever. I am sure I will be fine either way. Those that obsess over details like that may find this to be flippant, but what is a degree, especially if I use a suspension device.

Oh, yes.......didn't I mention that? I will be using a suspended bit up front. I have to swap out the lowers on the intended component before use, but it should work quite nicely on the front of this rig. (And it will not be white!) The thing is, the On One will be pressed into duty as a test mule for Twenty Nine Inches. That way I have to ride this bike! Seems like a good plan to me, at any rate.

But getting back to that fork for a minute- I am going to use a 15mm through axle wheel up front, and the fork needs to be converted over from a standard 9mm quick release, which is necessitating the swappage.

Besides the wheels, tires, and fork, all else is coming off the old Vassago, so no big changes other than what I have detailed here. Stay tuned as Project White gets put together and I will hopefully be showing you some results of my labors here soon.
Posted by Guitar Ted at 1:30 AM

I"m stoked to see this project build up! I've been a huge fan of 29er ss as well. I've got a karate monkey (currently with gears though) and a kona unit. I keep buying 29er ss hardtails, I think it's an illness.

Great choice buddy... Going back to a frame model that's served you well in the past is a good recipe for success! Have fun!

FWIW, I, too, am building my new singlespeed today -- a drop-barred Singular Gryphon. It's a beauty...

@MG: Oh ho! Nice! I will be interested to talk to you about that bike once you've had time on it. Ride On Brother!

I'm surprised there has been less talk about the new On-One Fatty around here. What is your take on it?

@Biggs: It is a trail oriented fat bike design with lots of standover. From all indications it is a great bang for the buck. First production run was completely sold through on pre-order. That's about all there is to say now, really.

That was my take on it too, I'm test riding one tonight... may have to pull the trigger if it feels good.

I picked one of those up back then too (just seeing this post today),been loving it all year,and to those that haven't seen them in person,pics do NOT do the sweet paint justice,you have to see it in varying lighting to see all the pearls sprayed within the white :D