Self Supported: When Trans Iowa was formulated in the deep recesses of Jeff's and my addled brains in late 2004, we were trying to aim for the target set by the folks who had forged the Great Divide Race rules. This was an effort that was not the work of one person, but our point of contact was Mike Curiak, who at that time was one of the, if not the premier ultra-endurance off roaders, and who had a big influence on those big Western ultras and on Trans Iowa.

We learned a lot from Mike over the years, and I will admit up front that a lot of his advice and commentary on our silly gravel event took a while to sink in and get applied to T.I., but eventually it did.  We didn't go 100% with what I feel he would have done, but we did go a long ways toward his, and the rest of the GDR crew's, rules regarding self support.

Yesterday, a comment was made regarding this idea of "self support". The comment was that it used to be that the riders helped each other out, and "support crews" were unheard of. The commenter wondered if we'd lost something along the way.

Well, I am pretty sure the answer from a "GDR" point of view would be that neither idea presented in the above summation of the comment left is right, or in the spirit of "self support". I am pretty sure the idea of "self" means "you, the rider" in a singular sense, and by definition that pretty much excludes any help from any one individual, no matter if they are racing or no. At least in the strictest sense of that idea, I believe that is true. 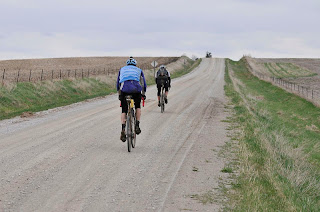 Now I will leave the idea of that behind, because at Trans Iowa, at any rate, we do allow racers to help each other out. However; we do not allow anyone outside of the event to support the rider in any way. At least while they are eligible for an "Official Finish", or for being able to receive a new set of cue sheets at a checkpoint.

Of course, if you are in need of assistance that can not be provided for by a fellow rider, you are done as far as Trans Iowa is concerned. At that point, there has  been a divergence from what we do at T.I. and what other events see fit to require.

We suggest a person be available to come and fetch you, since anyone associated with Trans Iowa won't. Or....you could just take care of yourself, and many folks do just that. They ride back from where ever it is they decide they can not finish Trans Iowa. Either way- You Are Responsible For Yourself.  The trick is knowing "when to say when", which is long before your tank runs dry, or long before you allow your mind to descend into exhaustion induced madness. Long before your knee gives out completely, or long before you are so sunburnt you are sick. Whatever; I am sure you are getting the picture by now.

In many ways, knowing when to "pull the plug" on a Trans Iowa attempt is harder than actually riding yourself into a bad situation. In many ways, stopping when you should is a lost art. This, to my mind, is an honorable, wise, mature, and "right" thing to get straight and be capable of before you attempt something like a Trans Iowa.

If you as a rider "get" that you need to take care of your own business out there without putting yourself or anyone else at risk, the self support issue is not a big deal. Sure- there are extenuating circumstances, and we can sit here and dream up scenarios all day long which fall outside of the above, but ya gotta agree that the vast majority of issues at these big gravel grinders, (or other ultra-endurance events), can be settled by having a good grasp on your own destiny.
Posted by Guitar Ted at 1:40 AM

Your comments about knowing "when to say when" are spot on. I might be called a soft guy, but no event, no matter how grand is worth permanent injury to finish. I've personally dealt with the fall out of making the right decision one day too late, and it kept me off of my bike for almost 5 months.

The ability to have visit from a support crew at every checkpoint at DK last year completely changed how I approached the event. It really became a series of medium length ITTs. That's not to say that you couldn't get into a bad spot in one of those legs (and I did two years ago), but it really was a different event than it was when I first raced in 2008.

I think each event type has it's own good and bad points, and it's up to the individual to decide what events they want to try. It's also just as important for the riders to honor the rules of the event, even if they aren't the rules they would use if they were a promoter.

At trans iowa v.9 are the non-spectators allowed to meet up with us at the checkpoints?

I planned on bringing my wife along in case I need a ride home and she was wondering if she was going to be at the hotel all day watching tv and sitting in the hot tub. I was just curious what the other non-racing people do in an unsupported race. Thanks, David

@David Swanson: Support people are not allowed at the 2nd checkpoint, (and we do not publicize where the second checkpoint is), but folks can hang out at the first one, if they so choose to.

Plan on bringing a cell phone and have your support person waiting just in case. In the meantime, we may have some pertinent announcements that may interest your wife regarding Saturday night/Sunday morning. In the meantime, Grinnell has several shops and attractions she might want to check out while she is there. No need to "just sit in a hotel room", unless that is what you want to do. Stay tuned...