Saturday was a travel day to get to Dubuque and get registered and settled in for the event. Mrs. Guitar Ted and I arrived at around 5pm, got our stuff into the motel room and got down to the event headquarters. I got signed in, (one of the first signed on!), and then we went to find something to eat.

Before that I had spoken with event organizer, Lance Andre, and he told me that the event had about 110 cyclists and with the poker ride riders and runners added in the event was going to have over 200 participants. That was a pretty significant increase over last year. I know for 2012 there were about 70 cyclists.

Triple D is kind of an amazing event in that there are four different disciplines with four different finish lines going on all at the same time. How Mr. Andre and crew keep that all straight, I have no idea, but my hat is off to them for organizing and running a classy, fun event. 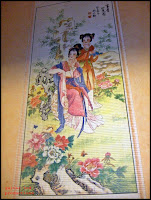 Well, anyway, then came the search for food. Mrs. Guitar Ted and I poured over the choices and debated what might be good. We eventually just hopped in the car and drove around until, by complete accident, we came across the same Chinese restaurant we ate at last year. We had a great, relaxing meal. Then, I went in search of a bottle of red wine. See, I have a solution I used last year for Triple D that worked really well, so I wanted to do this again. A bottle of red wine is necessary for it, so I got directions to a rather seedy liquor store in the downtown area of Dubuque.

I walked in and found the bottle liquor area where a sign greets you that says "Please, only one customer at a time in the liquor section." Hmm....a little red flag, perhaps, but I walk in and find a suitable bottle and walk up with my selection to the counter where the checkout lady, who is a rather disheveled looking gal of mid-40's vintage, is complaining about some life issue to another female who appears to be busy texting on her phone. Finally the counter clerk looks at me and says, "Are ya ready, Honey?" Umm........red flag number 2? Yes. I make with some small pleasantries and briskly walk to the car as three gentleman who were standing behind me smoking cigarettes in the store eyeball me out the door. 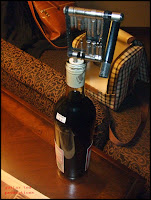 I got back to the motel room, and while Mrs. Guitar Ted went to the workout room to get her exercise in, I suddenly realized I had chose a bottle of wine that needed a corkscrew. Doh! I do not have such a device. So, being a mechanic, I search my "toolbox" for what I do have on hand that might be pressed into duty for such a job as removing a cork from a wine bottle. The solution presented itself in the form of my Blackburn Toolmanator multi-tool. It has a chain breaking tool that had a long, threaded section as part of the tool. I removed the main body of the chain breaker by simply unscrewing it from the threaded part, and inserted the threaded part into the cork by twisting it in.

Using the edge of the bottle as leverage, I could use the main part of the Toolmanator as a lever to pull down and I eventually broke the seal on the cork. A couple more gentle pulls and out comes the cork! Success!

As I am doing this, the wind is howling outside with gusts of upwards of 50mph, freezing all the melt and mud that we had heard was soaking the trails out on course. I was a bit concerned about the wind, because it might compound issues with regard to staying warm. I was hoping for light winds, but expecting the worst. I fell asleep and dreamt of warmer things.....

Race Day: I awoke on race day and got down for the free breakfast that was part of the event/motel package. After stocking up on corned beef hash, a sausage or two, and a pile of scrambled eggs with picante sauce, I went back up to the room to do the all important layering up before the 9:30am race meeting.

Gear Used: I decided to use a Craft wind front base layer, then a Nike thermal hooded jersey, with a Bontrager Thermal Winter jacket over the top of that. For the lower extremities, I used an Omni-wool pair of tights, over this a Trek Thermal Tight, and then a final layer which was the Zoic Blackmarket pant. For socks I wore a pair of Twin Six wool socks and a long, calf length pair of wool stockings over that. Boots were the awesome Keen Brixens and for gloves I used a thin Bontrager wool liner glove inside some Answer Sleestak "mittens". On my head I used a skull cap/beanie thing I got at CIRREM one year, and over the top of that I wore my hand made poly-fleece hat. That about did it. My hydration pack was the Shimano Unzen 10, and I had two insulated water bottles on the fork blades of The Snow Dog. In the hydration pack, I had extra socks, gloves, and a Marmot Precip jacket in case I got wet and needed extra protection. I carried two lights in the "basement" of the Unzen for later use.

On my 2011 Salsa Cycles Mukluk, I had a Revelate Designs Tangle bag with a spare Surly tube, a Lezyne SuperDrive pump, a Lezyne Air Caddy which has levers and two Co2 cartridges, and the aforementioned Toolmanator. I also stocked an extra base layer top of Omni-wool in there, along with a bag of unsalted peanuts. The Planet Bike Snak Shack doesn't play well with the Tangle Bag in the normal position, but works perfectly well against the seatpost, so that went there with some gel packs, a bottle of ibuprofen, and my point and shoot camera. I also had several gel packs in the wing pockets of the Unzen, and a balaclava and a large bandana in the top pocket of the Unzen. That should about cover the gear list! Now on to the event! 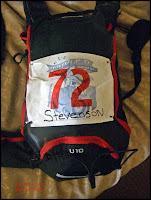 The Start: Lance Andre had told us that the beginning should have been all off road on trails, but since there was no snow, we had to roll out a ways on some pavement. Then on some newer trails, and finally back out on familiar Triple D course routing for a time. He also mentioned that the Heritage Trail sector had "no ice anymore" on it, which sounded encouraging. The field, which consisted of a mix heavy on fat bikes, with a significant number of 29"ers and cross bikes, set off to roll down to our big left hander and off into the woods and fields. I didn't position my self at the front, but rather about a third of the way back, which may be rather cheeky of me, but hey! Why not challenge myself a bit, eh?

Now off to the single track, which was new, bumpy, and had steep sections which necessitated pushing and ice covered creek crossings and ravines that also demanded a dismount. I was doing okay, a few guys passing me, but generally holding my own. We popped out on to a city street and bike path/side walk when I saw area honch Mike, a 3GR rider, stopped fiddling with his drive train. I pulled over to offer assistance, but after a bit of encouragement, Mike got the chain disentangled from between his crank set rings and he was good. I motored onward.

We finally reached the wide open fields which I remembered from last year, only this year they were brown and bumpy, not snow covered. We traversed the area and went down into the farm area, which was one of my favorite parts of last year's event, but which now was just an odd, bouncy-jouncy traverse through a pasture amongst frozen cowpies. Somewhere along the way here Mike jetted back by me and was seemingly none too happy, and well he should not be, since early race issues are definitely no fun. Oddly enough, the day seemed pleasant enough to me. Hardly any perceptable wind, and I was staying warm.

This sector continued with very bumpy, hard ground over some corn fields and frozen, marshy areas which had sedge clumps the size of bowling balls that would send you careening as if you were a ball in a pinball machine this way and that. Fatbike full suspension? I was ready for it right then! I found Mad Max along about this time plunking up a very rough climb. We chatted for a bit then he slowly pulled away. Here we came up to the point where last year we took a very icy descent down Humke Road, a B Level maintenance road. Lance took this section out, but replaced it with a longer wooded section that featured an incredible down hill, with a gut buster of a long climb interspersed with several cool descents and scenic views. This was a part of the event that was very technical, (as far as the down hills), but super fun. There was a bit of ice here and there which made braking tricky, and a couple of sketch creek/low water crossings as well, but wow! My favorite part of the event by far was riding this. So fun!

My camera was not liking the chill temps, so I didn't get a shot of anything here, unfortunately. Plus, with the ride being so super rough, I didn't dare take my hands off the bars for any reason. Eventually the rough stuff ended as we took a pavement descent down to the Heritage Trail and turned West toward the halfway marker of the event where we were required to check in.

That's a good place to stop for today. The rest will be posted tomorrow....stay tuned.
Posted by Guitar Ted at 1:30 AM