Continuing on with the story here........ If you missed the first part, check it out here.

Sea Otter 2007 will go down as the show where 29"ers crossed over from weird niche to legitimate mountain bikes, on par with 26"ers. Companies like Mavic, Fox, and Specialized showed their 29"er wares first here or at the Trek/Fisher Press Camp just days before. In my mind this was a huge deal for 29"ers and I was honored to be a tiny bystander when it happened.

Sea Otter was also cool from the "hanging out" standpoint. Industry people seemed a lot less rushed and were motivated to just chill out with unknown media scribes such as myself. I think I bought three meals the entire week I was there! Anyway, if you are reading this and you were one of those peeps that hung out with me, I say "Thanks!" It meant a lot to me and made the trip far better than I could ever imagined it.

After the goings on out in California I didn't get any rest. I had an event to put on called Trans Iowa! Version three was on tap and due to my partner in crime's recent hiring by some company fond of neon green, I had to do most of the pre-race prep myself. Stress reached critical levels when it was discovered that my cue sheets were incorrectly done due to some proof reading errors. I had to redo 100 sets of cue sheets by my self in three days! My whole family got involved at one point with my six year old daughter and then three year old son helping stuff race bags. Crazy stuff! 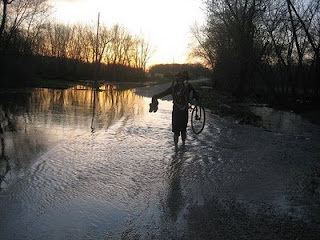 The event itself was a mix of highs and lows for me. I was brought pretty low by the 30 plus no-shows and by the fact that some of the roads were flooded and I didn't know about it. The cue sheets, even after my last minute efforts to clean them up, were still off and confusing in spots. The fact that I had to slog it out for up to 40 hours without sleep was a big downer too. I'm sure I took a few years off my life there! But finally, there was one person who shall remain nameless that really soured me after the event and almost killed any passion I had for doing it again. Fortunately, that didn't happen!

There were a lot of great things about Trans Iowa this year though that helped to overshadow the negative bits. Great weather brought out the best in the field and we had a record number of finishers. Lots of pats on the back and thank yous made the efforts seem worthwhile. The smiles and laughter at the finish line were like gold to me. Team Polska brought a smile to a lot of peoples faces. Running around with author Zach Dundas was a life saver! (Thanks Zach!) And of course the people involved were a big plus. Especially my small volunteer crew which made everything possible. To you I can not repay what you have done!

After the Trans Iowa endurance event was put to bed, I had another big task: The first Big Wheeled Ballyhoo. That'll figure into the next "rearview" post Stay Tuned!
Posted by Guitar Ted at 6:54 AM