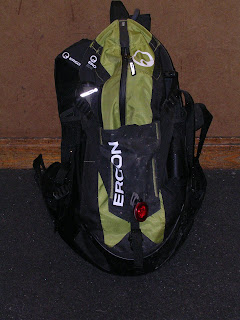 This is the second update of the BD-2, you can find the first update here. Since getting this pack back in August, I have used it constantly for just about every bicycle ride I have done since then. I ride five days a week to work and back and several weekends where I will do more off roading. This pack has been easy to get along with and dare I say, it's conformed to me as well! The straps seem to have molded themselves to my shape and especially the lower hard "frame" of the pack.

I won't go into too much detail here about the BD-2. Please click the links if you want to know more about what I have said or what Ergon has to offer you on the details. I am just here to update what I have experienced concerning this pack. 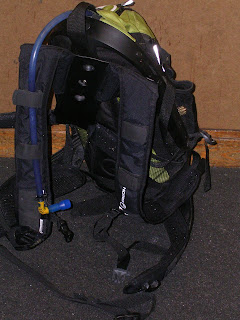 Since the last update I have taken this pack to Interbike. I used it at the Outdoor Demo and it did an awesome job of allowing me to feel free while riding strange bikes and strange terrain. Let me tell you, the last thing you want to deal with when doing things like that is think about your gear. The Ergon BD-2 just simply was there when I needed it: hydrating me, and carrying my stuff without being noticed. I never had to futz with it, with one minor exception.

I was meeting with Mike Curiak at the Demo and while standing there talking with him POP! Hey! The anchor for the chest strap pops off! Now this is the strap that attaches one side of the shoulder harness to the other and basically it's only job is to keep the shoulder harness up on your shoulders. What had given way was the plastic end that attaches to a seam on the shoulder strap. That end kind of grips over the roundish part of that seam. Well, I couldn't seem to get it back on, and went ahead and did a couple rides without it. The straps would migrate down my shoulders and I would have to "hitch" them back up where they belonged a time or two during the ride. The thing is, it didn't end the ride, but it made the pack kind of a hassle to ride with.

Fortunately for me, the Outdoor Demo included a booth from Ergon. I sauntered over there and hit up Mr. 24, who offered me up a cold beer while he reattached the anchor for the chest strap without replacing any parts. He just simply guided the thing back onto that seam and off I went. I found out that I had the chest strap way too tight leading to the failure. That's one thing I've taken to heart since, and I have found that you really do not need to have that chest strap very tight at all. In fact, I would say mine is pretty floppy, and it still does it's job.

The second story I have relating to the Ergon BD-2 is the time I got caught out in a pretty hard rain on the way to work. It was about 15- 20 minutes of rain that I had to ride in and the contents of my pack got a wee bit moist. Not soaked, but definitely wet. I e-mailed Mr. 24 about it and suggested that Ergon make a rain cover for the BD-2. He e-mails me back with this response: "Turn your pack upside down." I think, "What the....." But I know Jeff well and I know he wouldn't just be flippant for no reason, so I did turn the pack upside down. Well, looky there! A rain cover! Ha! I had it all along. I 'm not sure if Jeff had told me about it before, but if you get a BD-2, don't be like me, there is a rain cover- use it!

Okay, so that's about it really. I like this pack a lot, it does what Ergon says it will do and it is very easy to use and live with as a constantly used piece of gear. I highly recommend one.
Posted by Guitar Ted at 5:36 AM