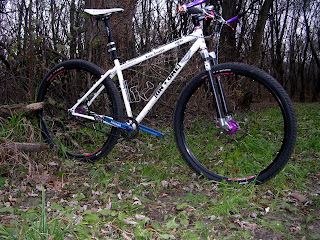 I had a chance to sneak in a short bicycle ride this past weekend. It had to fit in time-wise with what I had going on with the rest of my life, which meant that I could not get away to the Scout Camp, or even over across town to a couple of other local trails. Nope, this meant one thing. I had to go visit my "Old Friend".

<==The On One Inbred taking a moments rest before she got all muddy!

The trail I rode was a trail I have ridden since 1989 and one that I have hiked on in years previous to that. It is what we in the Mid-West call a river bottom trail. The modern name for an area like this would be greenbelt, I suppose and in fact, that is the official name of the area. Well, part of the name. The Leonard Katoski Green Belt, that is the full name. The trail winds it's way along the Black Hawk Creek which is a meandering stream that changes its mind about where it is going about every six months or so. This change of direction has an effect on the trail to a large degree.

I can remember parts of the trail that are long since washed downstream and in fact, the creek is still busy taking parts away and adding other new additions. This meant that my ride there was sure to be an adventure, since I had not ridden there for several months.

Sure enough, just like an old friend you have not seen in years, the trails had evolved. There were little surprises, but the main character of the trail was still very much intact. There was a high degree of familiarity, but I was caught out by some of the new changes. This trail is fun because of that. It's always throwing you a curve ball just when you think you have it figured out. The cool thing is, it is all part of the natural ebb and flow of the river and its banks. Nothing is maintenanced on these trails with the exception of the removal of large downed trees at times and a yearly mowing or two for cross country skiers and summertime users.

So, it was good to get out for a bit and ride. It was good to catch up with my "old friend". I see things have changed a bit since I was gone, but that just adds to the attraction of the place for me.

I'll be back soon.