It's The "Safe" Choice 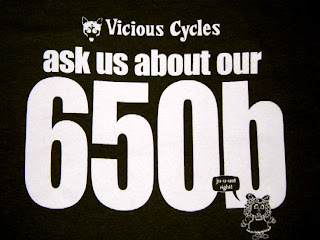 Yeah, this is another post about those renegade 650B wheels! I got this image sent to me and I found it amusing from a marketing standpoint.

First off, let me say that I have nothing against Vicious Cycles or their bikes. Great stuff and very well done. In fact I saw a 26"er last weekend that was outstanding with a Vicious Cycles down tube sticker. Nice, nice stuff!

No, this is about how 650B is being marketed, which is really an odd thing if you think about it. For starters, we wouldn't even be looking at any of this if it weren't for Kirk Pacenti and his evangelistic zeal in pushing this wheel size in front of our eyes. If it weren't for Kirk, this still would be some esoteric exercise in mountain bike experimentation by Grant Peterson of Rivendell. Secondly, all the claims made as to why the wheel size is better than either 26 inch or 29 inch wheels is largely conjecture since hardly any examples of the 650B wheeled bikes exist to even know if the claims work or not. On a purely theoretical basis, they don't seem to hold much credence either.

So why even bother? Well, there are a few things about it that make sense. That's not much the point though when it comes to the marketing side of this format. Take a look at the image here. It says, "650B is the safe choice" with it's allusion to the Goldilocks story by using the little caricature in the lower right hand corner. That's funny, because for me that's the whole message of the 650B movement in a nutshell. Another way I've heard it said is that it's "the best of both worlds". (Referring of course to 26"ers and 29"ers) All that says is that it's a compromise of either extremes attributes and not great at any of them.

Not that 650B doesn't have it's place in mountain biking, and I do not "hate" the wheel size. Again, it's the claims and marketing that I find strange and really..........rather goofy. I just do not think that the larger mountain biking community will accept or support the "B" wheels like they do the 26"ers, or even as much as they do the 29"ers. (Which in reality are still catching on) As I've said before, 650B is always going to be an oddity. A curious wheel size destined to always be in the back round and not a true front runner in the off road world.