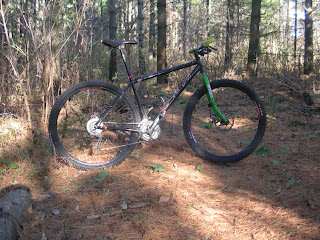 <=The XXIX+G with "monster truck" tires!

Saturday was the first real off road test of the new WTB tires that Twenty Nine Inches received to check out, test, and review. Of the three models we were sent, the Stout 29"er was the most intriguing to me.

This big, knobby beast weighs a lot! I mean, most folks might not even consider it a choice based upon that alone. That's something I was even having a bit of trouble with going in to this. Weight, especially on the wheels usually scares the bibs off of a cyclist and makes them run for the nearest alloy nipples, double butted spokes, and lightweight tires. All in an effort to defeat that terrible monster known as Rotational Inertia. I have to say it, I was a bit worried before riding these tires. 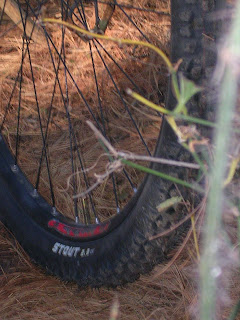 <= I caught the Stout 29"er tire seeking to pounce on and kill small animals in the forest!

Well, let me just say that I have an experience or two with some other model of WTB tire that was lingering in my mind. The wire beaded Exi Wolf was a tire I had ridden on two different rigs and thought that it was just a horrible experience. It felt like, in both instances, as if I had been pedaling through a mud bog the whole ride. No amount of downhill grade made for any relief either. I was amazed and really bummed, because I wanted to like that tire, but it just sucked. Really, that is the only way to put it. And to think that the Exi weighed 300 grams less than the Stouts I was about to ride. Perhaps you can see where I'm coming from. So, it was with some trepidation that I mounted up the XXIX+G with the Stout tires and decided to ride them up at the Boy Scout Camp this past Saturday. I didn't even ride that bike first, choosing the SE Racing Stout single speed first to ride. I was pretty toasted after a few rounds on the Stout too, so I was looking forwards to the worst. "At least this bike has gears," I thought to my self as I pulled it off the rack. 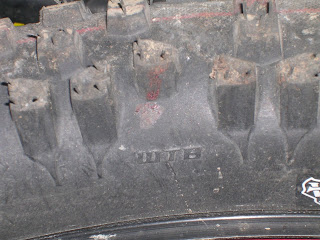 <=Check out the blood on that center knob in the pic. The Stout doesn't miss when it attacks!

Well, the first uphill on the service road didn't feel at all bad. It rolled quite nicely, thank you. I knew it wasn't me, because my legs were still screaming over the Stout single speed thrashing. I turned to head down the service road at the top instead of hitting the technical single track in the woods. I was following some of the other riders out there and we were trying to hook up with another rider that was out on the trail wanting to ride with our group. This service road is really a primitive gravel path. Lots of undulations, ruts, big rock laid in where the road washed out, you get the idea. And it follows the contour of the land, so no level spots or nice, consistent grades. This particular road sailed down all the way to the river level. I was flying!

The guys I was with took a left hand turn ahead of me, but I was having such fun, and feeling secure on the big Stouts casing, that I let fly with no brakes. All the way to the bottom, I was bouncing and careening a bit, but the Stout took it all in stride. I knew a more XC-ish tire would have had me scrubbing the brakes way before I did at the bottom of the hill with the Stouts on.

I decided to hit the rolling terrain alone and concentrate on the tires performance. They really did well. And guess what? I thought they rolled just peachy. 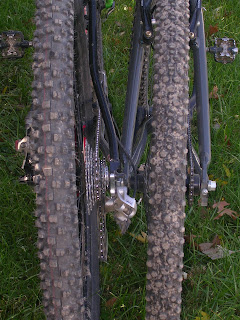 Once back at the parking lot, I met back up with the guys. I decided to roll Captain Bob's bike with the new Prowler SL on board. You know what? The wheels did accelerate better, but I didn't think it was that big a deal. Why? Because the Stout was so much fun. That's why. Fun is............well, fun! Worrying about weight, rolling resistance, what the tires measure out to, while all good things to consider, can really be fun suckers. I don't think that is what the Stout is about. I think it's a "fun hog" of a tire. (Apologies to Zap) I think the Stout was a hoot to ride, and I have not yet plumbed the lower reaches of air pressure on it yet either, which I think may make this tire even more fun.

It's almost making me think this weight thing is highly over rated. Maybe.......just maybe!
Posted by Guitar Ted at 6:30 AM