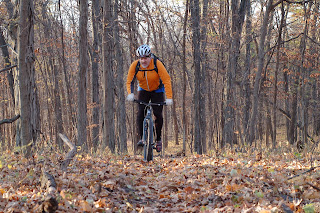 <==One of the rare times you'll see me using a "broomstick bar". Testing the SE Racing Stout recently.

Have you ever noticed how a lot of 29"er riders tend to use "funky handle bars"? You know, something other than your traditional riser bar with a bit of sweep and rise, like most mountain bikers of the past ten years have used. Well, if you haven't you need to check things out a little more! Funky bars are all the rage these days, but especially on 29"ers where they seem like they are a standard accessory item. Why is that? Why did 29"er freaks go the funky bar route?

I have written on this before and have posted that I think it's because 29"er freaks are........well, freaks! (I mean that in the best possible way!) An open mindedness to trying things different or out of the ordinary was how I had at first thought about this. While I still think that is partially true, I am thinking that there is a reason from a mechanical viewpoint that funky bars were/are predominantly a 29"er phenomenon. An inherent reason that is so second nature that it escaped me until just recently.

It's because of the 29"ers tendency to be more stable and less "endo prone". Let's take a look here: The way I came about my theory is from riding a traditional riser bar again recently. I have not done much of any riding on what you would call a traditional bar for a long time, so the sensations were almost "new" again riding that riser bar. I was really paying attention to what most users of a riser bar don't ever think about. The key to my theory is how your shoulders are lined up in relationship to the travel of the bicycle.

A traditional riser bar puts your wrists, forearms and shoulders into a positioning that makes you rely more on your pectorals for preventing you from going forward over the front end of your bike. Lets say you were going downhill. You can mimic the same type of stress on your body by standing about two to three feet from a wall and leaning into the wall by supporting yourself with your hands. Try putting your elbows up, turn your wrists slightly outwards, and point your thumbs downwards at the floor slightly to mimic a more traditional grip on a bar. Lean in towards that wall and see which muscle group you feel working. Now try the same thing only this time point your index fingers vertically up towards the ceiling, put your wrists and elbows more in line with your fingers, and lean in towards the wall. Now feel which muscles are working.

My theory is that funky bars are more like the second exercise above than the first. They require you to hold your upper body weight more by means of your triceps than your pectorals, as a riser bar would. Why dose this have anything to do with endos and 29"ers? Well, if you are going to push yourself back into a standing position using your hands as a pushing off point in the two exercises above, the larger pectoral muscles will be easier on you to use than you triceps, especially if you repeat the motion several times. This type of movement is similar to what you must do to keep yourself back over the rear wheel on descents. Using a riser bar keeps you using that larger muscle group which won't fatigue as quickly and is stronger than the arm muscles that would have to do the same job on a funky bar. Less chances of endo-ing and more chances for control in sketchy terrain. This is why you will most likely never see down hillers using anything but a riser bar.

So, why funky bars at all? Well, 29"ers have a tendency to not endo due to the relationship between the axles, bottom bracket, and the rider. You can pitch a 29"er down hill and get on that front brake and not have the rear end start kissing your backside as easily as a 26"er. Add to this the gyroscopic stability of a larger wheel and you can see how it is harder to deflect a bigger front wheel off line on a descent. The added roll over ability of 29"ers features in as well, since the front wheel has less a tendency to stop and pop over an obstacle and more momentum is carried through. These three things keep you from having to use your upper body muscles as much to keep your body behind that front axle.

Now using a funky bar is more of an option plus you gain the ability to breathe better since your upper body muscles are not tensing up and fighting what your lungs are trying to do. I'm not saying you can not use a funky bar on a 26"er, but using them on a 29"er just "feels" better and I think this theory has something to do with that.

Call me crazy, but that's my take. Try to check it out sometime on a local trail and see if you don't notice the same things.