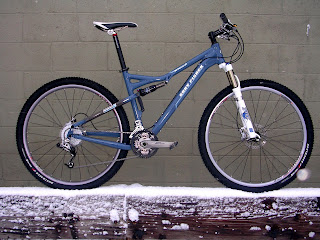 Today was the Turkey Burn up at Camp Ingawanis. I met up with Captain Bob, Casey, Paul, and Jeremy for some fun on the frozen tundra of the Camp's trail system.

I was sportin' the new '08 Fisher HiFi Deluxe 29"er and I let everybody ride it. Really! If'n ya wasn't there, then ya missed out! I'll be posting my thoughts on the bike on Twenty Nine Inches, (where I've already got a bunch of images and info up already on this beast), but let me just say that all that rode it gave it a big thumbs up. That was kind of nice to see the reactions from the other guys. It validates my feelings about the G2 geometry and how Fisher '08 bikes are really dialed. I've always said that you can write thousands of words about a bicycle but you can't often understand it until you ride it. Some of the guys picked up on it immediately. Pretty cool!

Anyway, the ride was good. I got lost from the main group pretty much immediately since I was futzing with my booties which weren't allowing my clean entry into my clipless pedals. More knife work will be necessary, but not today. I ended up ditching the booties and risked freezing my toes, but at least I could ride. I finally got reunited with the group, but I wasn't riding all that well. Seems to be a common thing this fall. I haven't felt "on" with a group for months. I have had flashes of great sensations on the bike, even recently while riding to work, but today I was really flat.

Still, the HiFi was making riding easier and I had a lot of fun on it. However; I had to do a test run on the SE Racing Stout too. So, I switched out and took off up the service road climb. The Stout is a single speed and I was dreading the climbs, but I was feeling a bit more spunk in the legs now and kept up just fine. I got into the first section of trail and ate it hard on a leaf strewn corner heading downhill. I heard something snap. The ground was really hard. I stopped, rolled over and stood up. I could raise my arm over my head, so I was okay. Whew! It didn't sound good, but I was okay.

Captain Bob and I were both on single speeds and we decided that it was time to head home after hitting the flats for awhile. the rest of the guys decided to head back too to start trail work . The final service road climbs were tough, but I made them all without killing myself and having to stop to rest. I was riding better and I was on a single speed. Go figure.

The trails were great, fast, hard, and sketchy with deep leafy cover in some spots. This made some spots treacherous, but still doable. Frost flew up off our tires as we sped along the trails. It was a great early winter ride. Mission accomplished, I headed home with Captain Bob's Mamasita in tow to repair her brakes. (Done, by the way!) The good Capitan will be testing the SE Racing Stout for a bit now, so he took that rig home. It's all good.

Spent the rest of the day with my kids and wife. Hope your weekend goes great! Get out and ride.