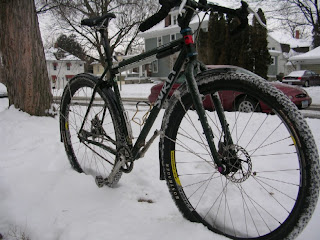 <==The '03 Karate Monkey pulls through it's fourth winter of duty.

This is my winter commuter, well.....actually it was my do everything bike! Now it's primary funtion will be winter commuting. Anyway, I have to get on the stick here and fix her up because the snow is on the way and the Monkey is in pieces.

Four winters and I thought, "Ya know, I probably should tear into this and take a look at how things are going." Well, it was about time, I'll tell ya that much! The bottom bracket is still seized up in the frame. No worries really. It's a UN-53 cartridge style BB and is smooth and knock free yet. However; I'd still like to break it free! The Cooks Brothers cranks need a new chainwheel, and that hidden chainring bolt is giving me fits. I'll have to take the spider off, but......you guessed it...the spider fixing bolt is stuck! Well, I've got a plan for that. I just have not gotten around to it yet.

So, a tear down, inspect the insides of the tubes on the frame, new headset, new cogs, and a new chain. Oh yeah! Did I mention that I robbed the brakes off of this for another project. No? Umm.......yeah........I'll be needing those too! Anyway, They will be disc units. Also, the Paul Word hubs/Alex TD-17 wheelset went to Captain Bob for a single speed project he has going on. I gave them to him since the bearings were feeling less than smooth in the hubs. 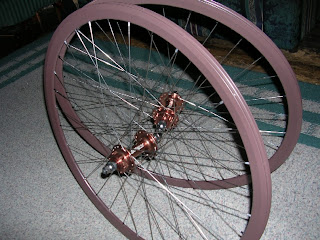 These are what I'm replacing the old wheel set with. Surly "Jim Brown" hubs laced to a custom powder coated Velocity Deep V pair of rims. The Deep V rims shouldn't collect a ton of snow in deeper drifts and I can run skinnys or fatties on them. 45mm studded tires or 2.1"s for slop. I'll still be going single speed, obviously.

I'll still have the drop bar set up too. Can't get away from my years of tweaking my posistion on this bike! I might even get a rack for the back of this one too. It would be nice to ditch the bags on my back everyday for a change. That's about it for the set up. Now I just have to get it completed!

I just realized that with these wheels and the Karate Monkey's Campstove Green paint it will sort of look like woodland camo. Hmm...........maybe I'll have to play off of that a bit with my components and accesories.

I'll be posting pictures of the completed rig hopefully soon. It's up on the front burner now!
Posted by Guitar Ted at 6:30 AM