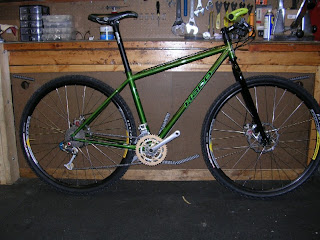 Well, after a long and drawn out build process, I finally got the Mary XC put together yesterday. I still haven't ridden it outdoors yet, (due to my cold still hanging on) but that should get remedied soon.

The backround on this is a bit interesting, so forgive me if you already knew, but I'm going to recount here how this came together.

Back in May of last year I was contacted by a guy from Haro Bicycles. He told me that they were interested in having me write some catalog copy for their upcoming line of 29"ers. I agreed and sent them two different versions in the length that they asked for.

It turned out that they liked both of the versions and said that they were going to use them both. I was floored! Not only did they use both paragraphs, they put them together on the same page.

They decided to "pay" me by sending out this frameset. I got it back in November, and I then began the long, slow build up process. Some of the parts were new, like the Salsa 17 degree handle bar, seat post, and Cro Moto stem. The Avid BB-7 disc brakes- 185mm front/160mm rear, the XT disc hubs, Wheelsmith spokes and nipples, and Alex TD-17 rims. The front derailluer was from Mr. 24's personal stash- a SRAM X-Gen, and the bottom bracket was a new one but "old skool" as it is a UN-73 square taper cartridge BB.

Then there is the "parts bin" stuff, like the Sun Tour XC Pro Micro Drive crankset, the XT rear derailluer (circa 1995) and it's cartridge bearing jockey wheels in gold ano. The cable running to the rear derailluer goes through a first generation Avid Roll-a-ma-jig in ano blue. The cassette is an old XT 8 speed one that I had that was barely used from 1997 and is shifted by old 8 speed XTR brake lever/Rapid Fire combo's. I'm going to include the grips in this category, since they were heavily used by Mr. 24 himself and passed down to me to try out. They are the Ergon Team Green GR-2 magnesium bar ended grips. The saddle is an original WTB SST titanium unit from 1996. No pedals in the picture, but I'm going to mount on my gold Ritchey clipless peds from 1995.

Anyway, that's the latest 29"er in the stable. Look for a ride impression soon!