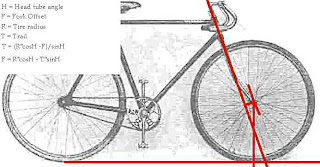 One of the issues that comes up most often in my discussions with folks about 29 inch wheeled bicycles is front end geometry and how it affects handling off road.

It seems that alot of you are confused by a certain aspect of all of this called "trail". That is the term that describes the distance measured on the ground from your tire contact point to where an imaginary line would intersect the ground in front of it that describes your steering axis, or head tube angle. The measured distance, called fork trail, affects how your bike steers and handles.

You can change the fork trail by adjusting the head angle, changing the fork offset, changing wheel/tire size, or with any combination of these three things.

Fork trail has the effect of making your bicycle a rideable, controllable machine. The simplest way to understand it is to think of a shopping cart wheel. The axle of the wheel "trails" behind it's pivot point when you push it. If you try to go in a reverse direction from the way you were going, the wheel quickly pivots around until theaxle is behind the pivot point again. Think of the pivot point as your steering axis, or head tube angle. The axle of the cart wheel is "offset" from the "pivot point" and the distance from where the cart wheel touches the ground to a point where the "pivot point" of the cart wheel would intersect the ground is the "trail measurement" Think, "How far does my wheel contact patch sit behind my steering axis?" and you've got it.

Typically, fork rake on a 26 inch wheeled bike is right at 38mm-40mm. This has been arrived at by much experimentation that was done back in the 80's. Now, with the advent of the 29"er mountain bike, the mere increase in the diameter of the wheel increases the trail figure. More trail typically translates to slower handling. In an effort to "get back" to "typical" XC type handling, there are two ways that designers have addressed this concerning 29 inch wheeled bikes.

One way, and the most prevalent way used now, is to increase the head angle a bit. This school of thought has examples ranging anywhere from 72 degrees all the way through to 73 degrees using a "standard" 38mm offset. (This is done to stay in compliance with currently used suspension fork offsets, which are typically 38mm) This reduces the trail figure back into "quick" handling territory, but also tucks the wheel a little closer to the bottom bracket, which can lead to some toe overlap problems, especially in smaller sizes.

The other school of thought is to increase fork offset, which reduces the trail figure, and quickens up the handling. It does make the front wheel sit a bit further away from the bottom bracket, which can be good, or it can be seen as bad, if it increases wheel base to much. Also, keep in mind that most currently available suspension forks for 29"ers have 38mm crowns, so it doesn't work so well with current popular fork choices all the time. (Although this aspect of the 29"ers bike geometry is about to be addressed.) This solution is most often seen with rigid fork models.

Hope that helps clear up any questions on front end geometry for you. If you want some advanced fiddling around, check out this fork trail calculator.

I wouldn't worry too much about all of this though. I'd just suggest ya'all go ride your bikes, if you can this weekend. That sounds like alot more fun!