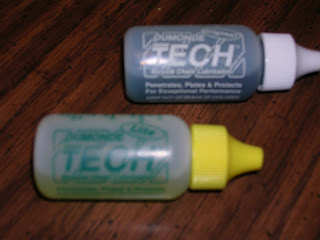 I got my hands on some of this lube that I have read about on the endurance forums on mtbr.com before. Seems that it is pretty highly recommended, so I thought that I'd give it the once over on a few of my bikes.
It's called Dumonde Tech and they have some pretty interesting claims about their lube. They say it "plates" the metal of the chain and "bonds" itself to it, providing a lubricant that won't wash off. The components of the bike stay cleaner, last longer, and run quieter, or so says the literature. We'll be finding out as I will use these lubes on a couple of the different rigs here at Guitar Ted Labratories. The way I figure, if it works out during a long, wet gravel grinder, then it will have passed the ultimate test.
Another very interesting opportunity has presented itself over the weekend and hopefully, I'll have some news by mid-week over at Twenty Nine Inches. The item in question is a fork that is claiming to have some pretty incredible attributes. Stay tuned!
In health news it looks like I've finally turned the corner. The nasty cold/sinusitus has been subsiding over the past 24 hours and looks to be on the way out. Hooray! Looks like bicycle riding and running will commence sometime again this week. Of course, it snowed four inches last night, so I missed all of the primo weather the first week and a half of '07, but then again.....Snow is pretty fun to ride on, if you take the right precautions and attitude with you.
Lastly I have some rather difficult news.......for me anyway! I had been planning on doing the Dirty Kanza 200 in May, but it looks to be off my calendar now. A friend is getting married that weekend and not only that, the couple wants Mrs. G-Ted and I to weild axes at the ceremony and sing. So while my friends are suffering in the Flint Hills, I'll be pickin' my git-box at a wedding! ah.........crap! Couldn't say no, so that's the way it goes sometimes. Gotta stick by your friends in their important times in life, ya know? I'll just have to find another event to do!
Well.........enough about me!
Posted by Guitar Ted at 5:59 AM