And You Are Doing This Bike Because.....? 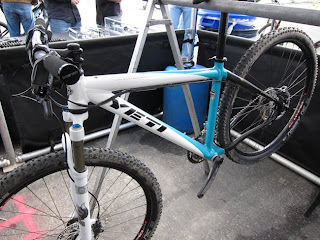 Sea Otter is here and that brings all sorts of cool product introductions to the fore. I had heard rumors of a Yeti 29"er early in the year, and I had the rumor confirmed shortly after. So I started digging into it to find out just what was going on.

Well, come to find out that the powers that be at Yeti were not very fond, (putting it mildly) of 29"ers and said, "..we'd rather close the company down.." than make a 29"er. (The quote may have been slightly different, but the meaning of it was clear.) So, what gives?


Yeti is "officially" unveiling this rig today, so expect a good "spin" on the whole deal from the top brass at Yeti. However, this sort of statement about "never making a 29"er" isn't going to go away easily. Especially when the name of the bike is "Big Top", which Singletrack World's Chipps Chippendale picked up on as he mused, "..perhaps a reference to clown bikes, perhaps not.." I'm thinking Chipps is on to something there.

If Chipps is right, and when taken in context of Yeti's distaste of 29"ers previously, you have to think he is, then one might wonder "Why?" And secondly, "What did you do to make it worthwhile to us/you to make one?"

It is a hardtail, may have convertible drop outs for single speed conversion, and has a carbon fiber rear triangle in the classic Yeti loop stay style. Of course, it is a Yeti, so there is that cache' that it has going for it. That said, I think it is not that big of a deal in the grand scheme of things 29"er. (If one can say that 29"ers are "grand" at all) It just seems to be a bit disingenuous and, well.......a bit of a strange marketing ploy, considering the model name and all.

Of course, Yeti is not the first company to say that they would "never make a 29"er". That distinction was squarely the realm of Specialized bikes for several years. However, Specialized softened their tone, then came news that they were exploring the possibilities of a 29"er, and finally they announced they would be doing a few, ironically enough by introducing them at Sea Otter a few years ago. Specialized then backed it up by bringing something different, (at the time), and became fans of the genre afterwards.

Okay, so you can forgive them maybe for their initial skepticism, and when taken into context, Specialized had grounds for being skeptical in 2005. But this is Yeti, and it is 2010. A lot has changed in five years, and Yeti isn't Specialized and doesn't have ignorance or lack of technical advancements to fall back on as an alibi like Specialized did back then. Maybe this will all blow over and be no big deal in the end, (likely), but I find it very strange that any company that makes such an anti-29"er stand, as Yeti has, would then turn tail and make a 29"er anyway. At the very least, it is plain goofy. 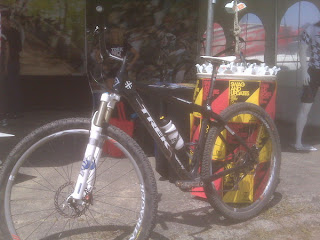 More Sea Otter Weirdness: I just wrote a peice on Trek making a 29"er someday and then this thing shows up at Sea Otter.........

Notice the head badge? Yeah........if you are going to do a good fake, you need to get the details correct. What is worse, the headtube badge is put on with an adhesive backing, so it isn't hard at all to take it off.

Finally, I am not a "schooled journalist", so I don't often know or follow certain practices that the "elite media" follow. Things like not asking questions when the marketing guy asks for questions, for instance. Or like the time I was at a Trek Press Camp, and Tim Grahl and I were posting things up in real time with computers and cameras blazing while the "elite media" types sat around looking down their noses at us. Too funny!

So it is from this perspective that I found the following kind of interesting. Shimano releases information and images to the bigger media outlets for upcoming products with the stipulation that the information can not be released to the public until a certain date and time has been reached. This used to be not a problem before blogs and social media.

Now some media are getting twitchy trigger fingers. For instance, the latest Shimano information release is scheduled for today. 10 speed XT and SLX. Well, the aforementioned Singletrack World has had the info up since yesterday, with the post dated 4/16/10. However; the photos with the post are all dated 4/15/10. Whoops! Those pesky details again. I suppose they could say "Hey, it was 4/16/10 somewhere when we posted that Thursday night!"  Funny stuff there. They weren't the only ones to have it up a day early though. It also was posted on a couple of other sites I found, but the photos were not dated and the evidence not so blatant as on Singletrack World.

With that I bid you a good weekend and miles of smiles on your bicycles.
Posted by Guitar Ted at 1:00 AM

@brant@shedfire: #1: I'll correct that, thanks.

#2: Technicality, and again shows that the media wonks have "twitchy trigger fingers" these days because of the new media landscape, which was my main point. Singletrack World is......well, worldwide, and as such, they published to half the world before the embargo was lifted, as did a few others. (So, on the 15th AND 16th!!)

Yeti should have called it "the closer"

@brant@shedfire: Yes, agreed. And the change to new media, while being exciting and useful, will need to be sorted out as we go in regards to these things and Corporations, companies, and small builders. Communications, as always, will be paramount to successful media/industry relations going forward. Details will be even more important.