A Day On The Bike With A Good Friend 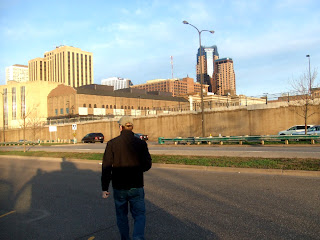 So "Super Secret Mode" was still on all of Wednesday morning, but I can reveal that I was able to hook up with my good friend Jason Boucher and get in some dirt on a bright, clear, cold morning.

Our destination was St. Paul, Minnesota. We stopped along the river downtown where it didn't take long for Jason to whip out a camera and start hunting for a shot of the city in the early morning light.  Downtown is a beautiful area, and the image capturing opportunities are many. The fact that it was so clear and bright this morning only made the images more tempting to grab.

I was running around like a chicken with my head cut off this particular morning and spaced off the all important clipless pedals for the ride Jason brought for me to use. So, we hopped back into the car and ran back to where I had the pick'em up truck parked to grab that necessity. 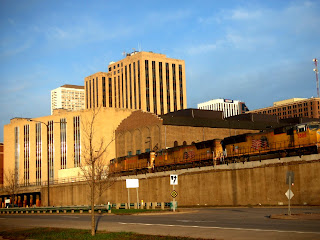 Just before we sped off we were treated to a train pasing by that had nine engines! Pretty cool!

I see a lot of cool trains on the way to El Paso everytime I go, but the backdrop is always the sage and scrub of the Southwest. To get this train in an urban setting was pretty cool, or at least I thought so.

Jason must have thought so too, as he was snapping off shots of it going by. 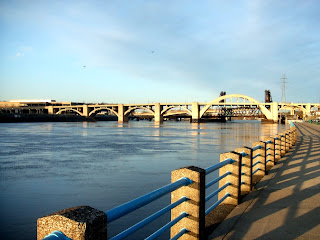 If you turned about 180 degrees from the train, this is what you would see. Bridges and a swollen river from the snow melt of recent weeks. Jason said the river crested last week, but it still looked pretty high Wednesday.

Even though it looks nice here, the temperature was 34 degrees with a stiff Northerly breeze which made it feel pretty dang cold! Jason forgot to bring any gloves, and he gutted it out anyway, I don't know how. It was freezing at the start by the time we got going.

We had to traverse some paved bicycle path for a mile or so, and then we hit the single track at a place called Battle Creek. (I think!) At any rate, MORC is doing their magic here and that means that these trails, which are already awesome, are only going to get better. 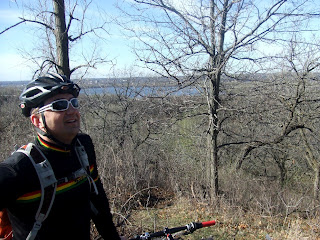 With the steep climbs that were also long-ish, I was getting pretty gassed. Of course, the rig I was using was a 1X9, which was tough for me and this sort of terrain, but I did my best. Jason was kind and stopped a few times to let me get my wits about me and chase away the pink elephants. (I swear they were real!)

The rain from the day before had made the trail fall into all sorts of conditions from bone dry to greasy. We had some excellent, rippin downhills at times and at others we were picking our way carefully so as to not wipe out. Sometimes we had excellent climbing, other times it was too greasy and slick. Either way it was good times and it kept us on our toes for sure!

This trail is also an old trail system. I was surprised to hear Jason say that he had helped create several of them. I know one thing, I will go back to ride here for sure! 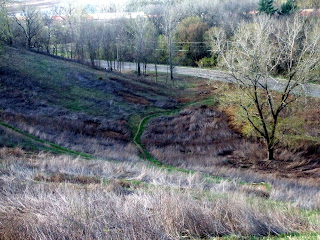 Here's a view from part way up a long, long climb. We started this section at the paved road and immediately started grinding upwards all the way to the top of the bluff. You can see the thin ribbon of the single track as it comes into the central part of the image and then it sweeps to the right as we look at this, just out of view. Then back up to the left, as you can see. It looped back around to the point where this shot was taken. (Click on the pic!)

This is in "flatlander Minnesota" ya'all! 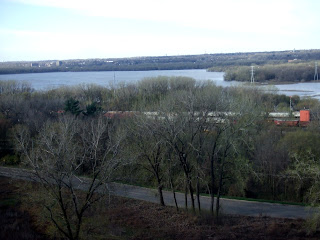 At the top, you could see way out over the river and the Twin Cities, which lay below. The views were awesome from several other places which were more secluded as well.

After this we started the way back down, but not all at once! No, no! There were several other shorter, but tough climbs that demanded our attention. For sure, the park here was far, far more difficult than the others I have ridden in the Twin Cities area. I blew a few cobwebs out today, that's for certain!

Then I jumped in the car and headed back home. The Super Secret Mode is over, but the secrets will be told. Just not now. I have been sworn to secrecy by several different "entities".

One thing that can be told, there isn't anything better than riding dirt with a good friend, no matter what else can't be told!
Posted by Guitar Ted at 1:00 AM

I used to ride Battle Creek a lot when I lived there from 94-98. Lots of potential so it's good to hear they have been working on it. Your photos bring back good memories, thanks.

Yea, the memories. I used to xc ski in Battle Creek park back in high school days some 30 years ago. We tried to ride some on those trails in the summers back then. I am sure they have improved quite a bit since then. Have not been up that way in a long time, now down in the desert southwest.