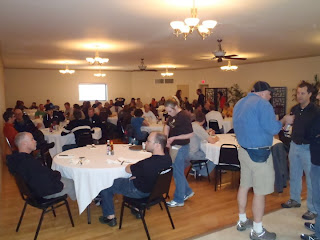 Getting There: The story of Trans Iowa V6 started off with a drive in the "Truck Without A Name" to Grinnell in the rain. I was doing okay, blasting some tunes, when a van tried to pass me and then slip between myself and the feed truck/semi in front of me at 60mph. Yeah, they about put me in the ditch! Nice!

Well, without further trauma I got there and when I pulled into town, d.p. called me and we met in Bikes To You in Grinnell's downtown area. We hung out and talked to Coop, the owner, and then we hit up some grub. Finally we decided to go to the motel and get our room. There we met Kevin Wilson who has a bicycle consulting business, and we all chatted for a bit.

We three then went out and checked on a bridge over I-80 that was in question. It turned out that it was not a bridge, but an underpass and it was fine. After purchasing a new rain jacket back in town at Bikes To You, it was on to getting set up for the Pre-Race Meat-Up. The volunteers were great and we had more help than we needed. Things were going smoothly, really. 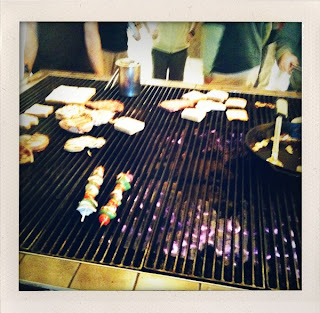 The gig was at The Grinnell Steakhouse which was an awesome place. Very nice inside, with our own room which was quite perfect and the service was incredible. Everyone was to "grill yer own" vittles which was a great way for the racers to meet each other.

The meeting was fun and went well. Afterwards we hit the motel and got some short but sweet shut eye.
Much of the talk was about the weather, of course, and we felt sure that with forecasts calling for minimal amounts of rain on Saturday that we'd be okay. As we left the Meat-Up, we noticed that the air temperature was rather warm for that time of year, and there was much fog, even with a stiff breeze. Something felt odd about all this, but at the time, we were more concerned with rest.

Tomorrow: The Start and The Beginning Of The End.
Posted by Guitar Ted at 1:00 AM

Gted,
Thanks for the coverage of TIV6. Audiocasting was a nice touch. I may scrap plans for an Ironman before age 60 and just try TIV7. Lost and muddy on Iowa roads has a new found appeal over plastic, carbon, and skinny tires.
Thanks!

Would it be possible to somehow post a link to the intended tiv6 course route (google map or otherwise)for those of us who were following the race? All we know is that the race started in Grinnell, the distances between checkpoints, and that you went through Monroe and North English. Could the route sheets be posted so that we can see what the riders had to navigate from? I enjoyed following the race online but would like to know more about the route. Sincerely, Bob from Grinnell

Bob - Here's an example couple of lines from our route sheets.

etc. All text, no graphics. Simple, but effective, and the mileages that I had were spot on. Three sheets of this to navigate the 45 miles to Monroe. Then we received 6 or seven sheets to navigate the 89 miles to What Cheer.

@Bob Wemer: I often get requests for route sheets and maps. The thing is, Trans Iowa is a labor of love that I lose tons of money and time over. We don't charge the competitors one red cent for it. The payoff? I get to meet these folks, watch some incredible riding, and have a lot of fun.

Making the route maps and publishing them for anyone isn't part of my intentions. I have already invested myself too much at it is to undertake the giving away, or even charging money for, the Trans Iowa routes.

Besides, the fun is in exploring Iowa's back roads for yourself. If I can do it, anyone can........

Thanks Mark and David! This year's course was the best yet. Even with the wet weather it was nice to enjoy the beauty of the rural back roads of Iowa.

You guys made the right call to end the event in North English. The weather was getting really sketchy at that point.

Thanks again and keep up the great work!

Thanks for the reply about not releasing the route sheet info. Your route sheets sound similar to the route sheets on my cross-country. There were no maps, just text listing the turns, distances between turns, and accumulated distances to the turns. Because there were no maps we often had no idea where we were and if we missed a turn, the only way to get back on course was to ride backwards until we found the turn we missed. I was interested in your route because you seemed to be the areas I have lived in. We lived northeast of Rose Hill and went to grade school in What Cheer and then moved to Montezuma during high school. I am now retired and live in Grinnell. Enjoyed following the race updates and aftermath. Thanks for it all.