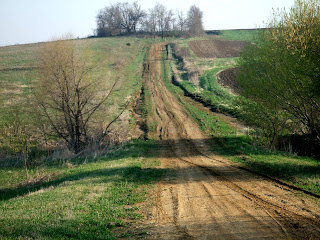 Well, the recon is DONE! Yes!!! A big load off my back this past weekend as d.p. and I met up at "dark-thirty" to go finish off the recon of the T.I.V6 course. We trashed about 50 miles of the pre-planned route and re-did about 40 to replace it on the spot.

We found some tremendous views. a ton of hills, some really cool B Roads, and a course that will give you a challenge unlike any other Trans Iowa we've ever put on before. One thing I will tell you out there is that the section from Checkpoint #1 to Checkpoint #2 is the flattest part of the course. (See the first photo for reference) As for exact cut off times, I should have those this week. Stay tuned! d.p. is compiling the info on the course and will be feverishly working on the cues now, so much of the info is in his hands at the moment. 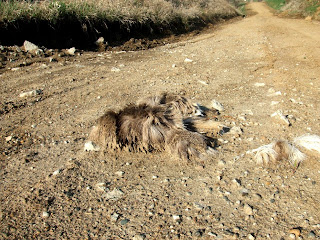 The course conditions are as weird as I've seen since T.I.V4. d.p. and I therorized that due to the early snow cover, the prolonged nature of the snow cover, and that the real cold weather didn't come until well after the snow fell, that the ground really didn't freeze up as usual. This lead to a lot of roads that we are using to become "sand-like". The heavy vehicular traffic due to planting and grain hauling has turned many of these "sand-like" spots into pits of loose, shifty, momentum-sucking patches that can occur on climbs, on down hills, and even on the flats. The passage of skinnier tired vehicles will be affected most by this since I fear that wash outs will be somewhat of a problem with bicycles shod with less than 35mm rubber, and in some spots, any bicycle short of a Pugsley will be affected! 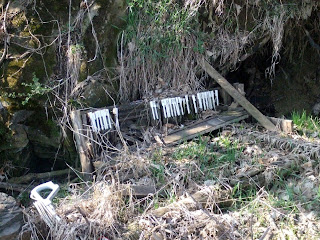 Other areas of concern include the loose gravel being thrown down to cover up these spots in places. The counties know that the majority of the seasons planting should occur within the next two weeks. They are not about to grade and repair these ripped up roads just to have them trashed again immediately. So, I think we're going to see these bad spots in a lot of places yet in two weeks. Expect big patches of marbley gravel. Some gravel we encountered was so deep the Truck With No Name was skittering about on it. This will also want to knock your bicycle off track and will suck away your momentum. A quick eye and a good read on the gravel will need to be maintained at all times to find the most efficient line through the morass. It won't be easy! 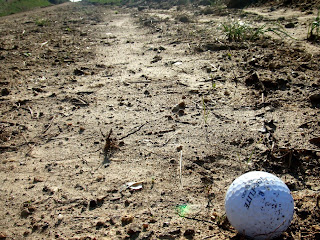 <===Looks like this one went into "the rough" on this B Road!

The course was especially dry when you take into consideration that the entire area we checked out was doused with a lot of rain just four days ago. You'd never know it though. The ground must have soaked it completely up. Even the B Roads showed minor evidence of the recent torrential down pours. That's a good thing for now.

The weather will play some sort of role in the final outcome, as always. Either good, (unlikely) or bad, the weather could change what we saw in a heartbeat. A rain just before or during T.I.V6 could radically affect how things go down for each rider. 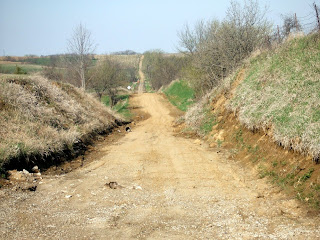 Speaking of weather, it has been an unusually good spring so far. We dodged a huge bullet by getting the massive snow cover melted with minimal flooding and not having big rains on top of that. In fact, this spring's precipitation has been pretty light so far.

Winds are something that will most likely affect T.I.V6, and of course, with a loop course, you are going to get a headwind at some point, most likely. Will it be an epic head wind? Will it be a light breeze? Who knows? One thing for certain: There will be wind! The wind wasn't noticeable today from the seat of the truck, and it was about seasonal for temps- upper 50's to low 60's. Late afternoon cloud cover caused the temps to dip back towards 50 in a hury though. dress accordingly! Oh yeah, by the way, it frosted Friday night too! 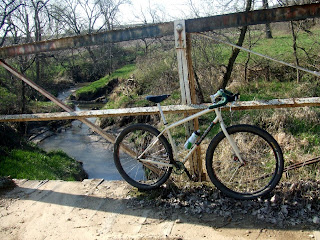 I've said it before, and I'll say it here: We have not ever had a Trans Iowa where it went from nice weather to crap and back again. It is going to happen someday. We'll get a day where some rain blows in, it cools down, and then the sun comes back again afterward. (In fact, it did that today to a degree!) Where you are out on course will be part of how that affects you, so be prepared for any circumstance. 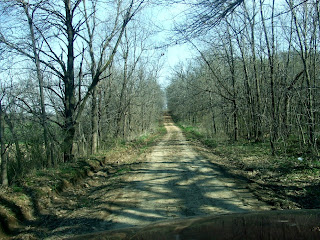 I'll chime in with more updates, but right now I am excited about this course and I can say that it does show another side to Iowa that many that live here may not be aware of. I saw some sights and things today that were new to me, and were very cool to drive through. I know riding a bicycle through this course will be a great adventure. I just hope that the weather co-operates and allows you folks to experience a bit of what d.p. and I have cooked up for you in T.I.V6.
Posted by Guitar Ted at 1:00 AM

Gted,
I rode with a road group today and a fellow had on a Ragbrai jersey on so I ask if it was tough. Yeah it was tough. I asked if he had heard of a ride across Iowa on unimproved and gravel roads, all at one time? He said no that it would be just crazy.
I don't think Ragbrai would be that tough but he may be right on the crazy. Have a grand race/ride/adventure.

@tom: Thanks! I appreciate the kind thoughts.

Here in Iowa everything that is cycling related is measured by "The RAGBRAI stick", whether you like it or not. Kudos to the RAGBRAI folks for becoming an iconic/cultural touchstone, but like many "legends" the idea of RAGBRAI being "tough" has been elevated to mythical proportions.

Having had "Sir Lance" show up a few times and school the unwashed masses has done little to diffuse that myth.

RAGRBAI tough? Only if you don't do any riding ahead of time. The only thing that makes it that difficult is the heat that occurs at the end of July.

GT - I've noticed the soft/sandy spots in a lot of roads around this area the last few weeks. It's something that I've not really ran into during the last 2 years of riding. Should make things interesting for sure...

Mark,
You'll have to give me the coordinates of those B-roads. I may not be able to make TI6, but I will have to do some destination rides this summer.