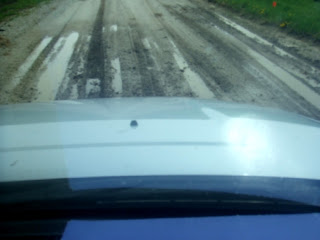 As the afternoon wore on we were more concerned with the potential weather situation. d.p. and I knew that it was only a matter of time before too much rain would make the roads so bad that we would see riders missing cut offs.
<===Ditch to Ditch mud hole on the way to Checkpoint #2
When we arrived back at Checkpoint#2 we saw all the volunteers and they had the tent set up, ready to go. This checkpoint closed at 5pm and on a normal day with normal roads, the lead group would have been there and gone by 2pm. Not today! It was closing in on 4pm and we hadn't seen anyone show up yet when d.p. and I decided to head out to do some re-routing. 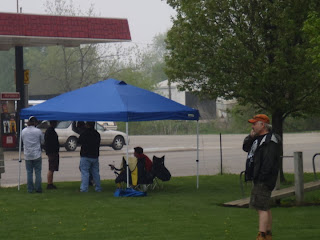 We knew we had to remove about 4 miles of B road to speed things up going into Checkpoint#3. The time allotment was originally longer for this section anyway due to the tough nature and amount of the B roads in that section. With the rain and road conditions we had, they would be a killer on time. Fortunately we had learned a thing or two putting on 5 previous Trans Iowas!
<===Making a Trans Iowa Radio post at Checkpoint#2: image by Kevin Wilson
d.p. and I left word with our volunteers to let folks coming through know to look for re-routes and then we bugged out. It wasn't long afterwards that we were caught in a downpour. It rained really hard! We found out later a lot of the riders were also caught in the same shower. We were extremely concerned, but it let up and quit, so we forged ahead. The roads actually were some of the best we had run across all day in the sector we had to re-route onto. We were encouraged for a time by this. The winds were picking up out of the East-Northeast though, and the feeling was ominous 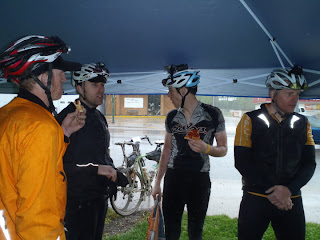 Meanwhile we were getting word that something big was going on at Checkpoint#2. Meiser, Gorilla, and the rest of the chase group had arrived sometime after 4pm and were having a debate under the tent in What Cheer. It was raining pretty steadily there and the riders seemed to be considering dropping out of the race en-masse. That would have been an unprecedented event, and d.p. and I wondered at this news.
<===The debate at Checkpoint#2: image by Kevin Wilson.
Still, we had a job to do and we had to get going up the road. We had just completed the first re-route sector and we were re-fueling the Element while I made another Trans Iowa Radio update. Then it was off to the B road sectors closer to Checkpoint#3. We were in constant communication with volunteers from both Checkpoint #2 and #3 during this time and we were also getting reports on the weather from various sources. We were really busy! 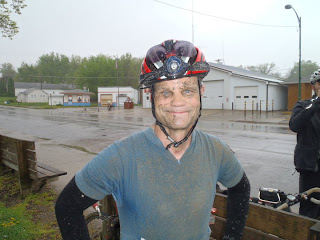 The news wasn't very good either, on the weather front anyway. The winds were forcast to increase to 30mph with higher gusts and the rain was going to kick back in and stay all night. We were very concerned, and then it happened.
<===Charlie Farrow @ Checkpoint#2: image by Kevin Wilson.
Rain. No.......not just any rain. Rain of biblical proportions. We couldn't even see to drive and had to park the Element on the gravel and wait it out. The rain bounced up off the gravel in sheets it was hitting the ground so hard. It was amazing!  I looked at d.p. and asked if he really wanted to continue to drive in these conditions. He said no, of course. We had been fighting to stay on the road all day. Several times we were nearly stuck and a couple of other times we narrowly missed going into the ditch. It was harrowing in the daytime, we couldn't imagine doing it in the driving rain, with high winds, in the dark. No. We were ending the event. It was madness to keep going not only for us, but for the riders as well. We debated a couple of scenarios to end with, the d.p. advised that we should backtrack the course to see where the riders were.
We had heard that the chase group had indeed dropped out of the event in What Cheer and were getting rides to Grinnell arranged for themselves. Gorilla and Meiser continued, of course. But then we heard something we were quite amazed by. A few riders that we thought had no chance of making the Checkpoint#2 cut off not only made it but rolled right on through and were still on the road! We had eight riders and seven bikes to worry about now.
Next: Eight Riders- Seven Bikes
Posted by Guitar Ted at 1:00 AM

Gted,
I am really enjoying the unfolding of this story. Big things require big people to make them happen. Your coverage and the tenacity of the participants is inspiring and a bit daunting. There is a lot more coming out of Iowa besides corn, a sense of endless adventure and human spirit. Thanks!

Gted, thanks for an awesome event! Your blog posts of the event keep getting better and better! The Trans-Iowa is definitely the beast that it is described as

this reads better than a Dan Brown novel.

I agree. This tale just keeps getting better as it goes.