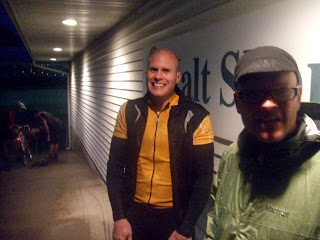 As d.p. and I raced backwards on the course, we got a text message from Joe Meiser, "Who is still in?" I was in the process of tapping out my reply when the cell rang. It was Joe. He repeated his question. I knew his ruse right away.

He was really saying, If anyone is still in the race, we're rolling. If not, we're done too. I told Joe besides he and Gorilla there were six people and five bikes still going. But..............we were calling the event.

"So, you're calling the event, right?", came Joe's reply. I confirmed that indeed we were. I asked him where they were at and Joe told me they were at the "EV Malt Shop" in North English. It was just after seven in the evening. 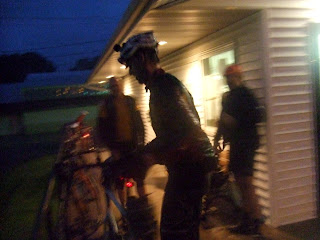 <===Corey, "Cornbread" Godfrey at the finish.

We took off now on blacktops to cut the time into North English. Our concern now was that riders may pass by the EV Malt Shop and that we would be left scrambling around in the dark tracking folks down. It was raining steadily now, and the winds were picking up more, just like the forcast we heard said that they would.

We got to North English about 7:30pm. Joe and John confirmed that they had not seen anyone else come up the street, which was on the route. We had made it in time! It was only 25 miles past Checkpoint#2, and Joe told us that it took he and John 2.5 hours to get there. Brutal! 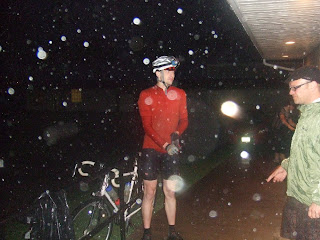 <===Matt Braun was the only single speeder to get this far.

Joe mentioned that we would have to go to the convenience store to finish the event since the malt shop was about to close. However; the proprieter
overheard our conversations, and offered to stay open to allow us to get the riders off the road! We were floored by the offer, and gladly accepted.

Once we had all seven bikes and eight people off the road, d.p. and I got our wet, cold selves inside where we found that the owner had re-opened the kitchen and his help was serving food and hot chocolates to the weary riders! This was amazing! 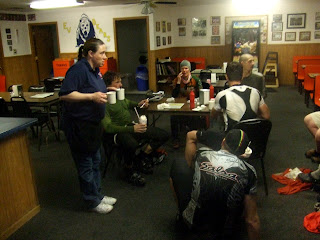 Not only that, but the riders were guided out back where the owner had hooked up a garden hose to hot water for the riders to de-mud themselves and their bikes with.

Iowa is an amazing place with amazing people!

I was floored by all of it and I thanked the owner several times. He was extremely humble and even offered to be open for a future Trans Iowa should we ever come around again! I don't think he quite understands that he may have more than eight people though! At any rate, it was a heartwarming scene and I was totally grateful to these kind folks at the EV Malt Shop in North English, Iowa. 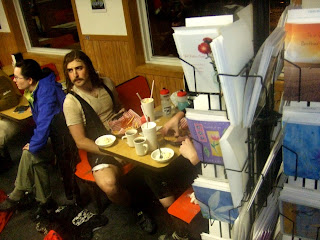 By this time, several folks had arrived to assist in getting the riders back to Grinnell. Our Checkpoint#3 folks were there along with some others to help out. By about 8:45pm, we were heading back to Grinnell in a driving rain and wind that was sketchy on pavement. d.p. and I knew we had made the right decision and we were glad to have everyone safe and sound.

That was it for the most part. Trans Iowa V6 was in the books. It is always bittersweet to have this event end, and especially so with a shortened course. However; there was really nothing else for it. Riders we pulled were showing early signs of exposure, the roads were treacherous and would only grow worse. Navigating in the dark around our re-routes would prove to be a sketchy prospect, and we didn't want riders getting lost in that terrible weather. Besides, we thought we wouldn't make it! Driving on these roads was proving to be downright dangerous in its own right!

So we felt bad about it, but we also felt very, very relieved and we believed we were doing the right thing. In the end, riders we have had contact with confirmed this. It just is what it is. But we still had time left in the weekend and we knew what we were going to do. To the barn!

Next: The Post-Race Events.
Posted by Guitar Ted at 1:00 AM

wonder if EV Malt Shop will be check point one or two next year, well we should know by thins time next year.

soaking wet in a ditch, hiding from the lightning about 15miles from CP2.

@mw: Sorry you got caught out. We didn't see that lightning, but we were north of you at that point.

oh it's nothing to be sorry for or anything i regret. i wonder if i would have been with someone that i could have motivated myself thru the part of the course i was stuck in the lightning on.

TI is a monster and i'm ok that it's not always possible to complete for me or anyone.