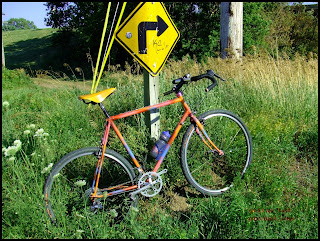 In my last post on the Gravel Mutt yesterday, I said I was going to have to swap out the head set. I fully intended on getting that swap completed Friday afternoon after I got off duty at the bike shop.

As I undid the fork and what not to get at the head set, I was thinking about how odd it was that the head set did not work. It was just fine when I used it a long time ago in an older road bike I had. Why should this bike be any different? I aimed to do a bit of investigative work as I tore down the front end of the Mutt.

The crown race was tight, the cups were tight, so where was I getting movement from? I knew the upper race was moving in the upper cup, so if the cup was solid in the frame, then it had to be the race and bearing. I figured maybe the bearings were shot, but they seemed okay. I put the bearings in the cup and could recreate the knock. Hmm.......maybe the cups were not symmetrical. Maybe I had the upper cup in the lower position. I tested my theory by putting the fork in the frame upside down. The crown race set into the cup, (which was in the upper position), like a glove. Yep! I screwed that up! Out came "The Rocket Tool".

The "head set cup removal tool" looks like a Russian space rocket to me, so I always call it "The Rocket Tool", and after a few easy taps, and another hand press fitting followed by a rubber mallet for good measure, I had the cups installed correctly. Everything was assembled again, and then a test ride to verify that everything was good.

More soon. I will be doing 3GR on the Gravel Mutt today. A report will follow.....
Posted by Guitar Ted at 1:30 AM