On a personal level, I was okay with my finish. I realize that my training was very limited, and that due to weather and work. Between the two, I had hardly gotten in anything consistent, long, or above and beyond the ordinary. This may have contributed to my DNF. However; I think that more than anything it was just a bad day on the bike, from a fitness standpoint. It was obvious that something was amiss during the event, and my body was not cooperating. To have gotten in the mileage I did was more than I probably should have done, but I did. I know that I left everything I had out there, so no regrets.


I was super-stoked for my brother and traveling companion, MG, who scored a third place finish. He did really well. (Read MG's report on Odin's HERE) Corey, "Cornbread" Godfrey scored a win, along with the two racers he was with, and one of those was a 64 year old fella by the name of Robert Sack. Awesome stuff right there. 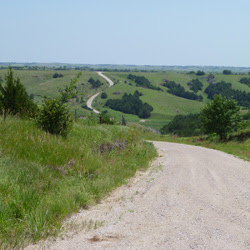 The Event: Odin's Revenge was the subject of much talk between MG and I after the event and on the trip home. Here are some thoughts we had about it in no particular order:

Overall, with some minor tweaks, this should become a much talked about event on the same playing field as Trans Iowa, DK 200, and Gravel Worlds. The scuttlebutt we heard was that Odin's will have an entirely new course next year and may be more than 150 miles again. We liked the 150 mile length here. Due to its summertime date, and potentially very hot temperatures, MG and I felt making Odin's too long wasn't in its best interest. But those things are not to be determined by us. Overall, we really, really liked the event, and recommend it to anyone.

There are so many people to thank, and if I miss anyone, please forgive me.

The Quigley's: You were running an event and still found the time to look after MG and I, (besides the other house guests), and we never lacked for anything. A very humble and grateful thanks to the both of you, and to Bear, your dog, for letting us invade his territory!

Team DSG: You folks have really impressed with the organization, the course, and the over-all feel of this great event. Thanks! Your running of things was faultless. The checkpoints were well stocked with water, things to chew on, and most importantly, great people. The event has great sponsors, a testament to the hard work of those who procured the promises of the companies behind you. Thanks to those sponsors, as well, by the way! Kona Bikes, Retroshift, Chamois Butter, Nebraska Beer- Craft Beer News, Bike Rags, Q-7, Revelate Designs, Back Country Research, Twin Six, and Osprey.

Matt Gersib: A public shout out to my brother, MG. Thanks for spending the weekend with me and being my traveling companion for much of my trip. Always a good time!

The Riders: What a cool bunch of folks! I want to especially thank Craig, the "MW Crew": Elizabeth, Noah, and MW, of course, and all the other folks that rode in Odin's. You made this a great event by being there. Thanks for letting an old, outta shape guy tag along!

Nebraska: Thanks for being something most folks do not believe, or know about. It was fun getting to know you better.

3GR: NOTE: I will have to bail out on another week of 3GR due to a funeral I will be attending.  Look for the 3GR to kick in again next week.

Congratulations to Mike Johnson!!! Mike Johnson finished the Tour Divide this morning in 16th place in his first attempt. What a ride!
Posted by Guitar Ted at 1:30 AM

Amen Brother! Thank YOU for being an awesome travel partner and for all the great conversation and fun experiences.

We were very well cared for, weren't we? Chad and Merrie are great friends and even better hosts. Thank you guys!! I slept like a baby while I was there... Which was almost a bad thing!

Have a great weekend, Guitar Ted. Talk to you soon, Brother.

Excellent write up! I've lived in Nebraska for 20 years and had no idea it could be this beautiful. This 2013 Odin's Revenge event is probably the best single day I've ever spent on my bike.

If I had to pick two "must do" gravel races each year, Odin's Revenge would definitely be one of them.

The Quiqleys, DSG and Gothenburg folks were top notch hosts, and I look forward to getting to know them all better in years to come.

Enjoyed meeting you and reading your write-up on the ride, but I'm sorry things didn't work out better for you to where you could finish the north loop. Except for one pretty cool MMR in a canyon on that loop, I think you were able to at least see the best of this year's scenery.

I agree, the people who put on this ride are awesome! I may be back after all next year.

An epic report for an epic effort! Nice work, Mark!

Thank you for sharing your ride with me, and for your kind words. That was a great weekend in every way. Most special was just hanging out with the people that are drawn to putting together, volunteering and riding this event.

I'm sorry that I contributed to your difficulties after Checkpoint 1. As I prepared to leave, I saw that you were engaged in conversation with Matt Wills and crew, who had just arrived. Thinking that you may stay awhile, and not presuming that you wanted to ride with me, I started out. I wish I had been there to help you work through the rest of the ride. Well, everything but your sidebar to the bushes, anyhow.

Thanks, again, Mark. I sent my postcard to Gravel Worlds and hope to see you, the DSG crew, the PCL crew and everyone else.

@Crosstrail: (Craig): Hey, no worries! It was not your fault at all, and had I communicated to you that I wanted to head out with you- I bet you would have waited.

It was really great to meet you. I had a great experience, and riding with you gave me a fresh perspective of events like this through your comments and expressions.

I won't be at Gravel Worlds this year, unfortunately, but I hope to run across you somewhere else along the trail.