Yup, it is another "What Works For Me" post. This time another product I used at Odin's Revenge, and on other rides....the Retroshifters. Yesterday's post on the Chaff Bag can be seen here. 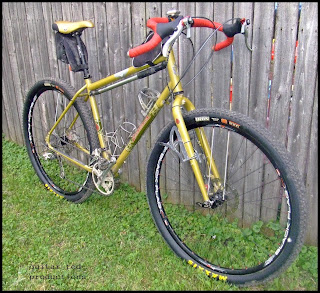 I've written a bunch about the Retroshifters here before, so I am not going to go over the details on the technical side, like I did yesterday for the Chaff Bag. However; the reason this series even started  was due to a question I received at Odin's Revenge, "So, how do you like those Retroshifters?" So they have that distinction.

Retroshift was a sponsor of Odin's, so maybe that also figured into the prompting of the question. Well, however that is, I thought that maybe more folks were wondering if I liked these or not. So, here's the deal.....

Previous to running Retroshifters I was a bar end and STI/brifter user on my gravel rigs. Bar end shifters are still cool, and my new "Gravel Mutt" will be sporting those things. STI Shimano shifters were fine for getting quick shifts from the drops, but I have a certain love/hate relationship with them when shifting from the hoods, and the darn mechanisms would gum up sometimes requiring a good cleaning with a solvent. Oh.....and sometimes the shifter paddle would rattle on the brake levers. Yeah, easily taken care of, but still that's another thing you have to do sometimes, right?

Plus, getting a new set of levers for another gravel bike can be really expensive. Well, that is if you want something above Tiagra level, or something like a Rival shifter. I am running a few drop bar bikes and may get a few more going. That adds up in a hurry. 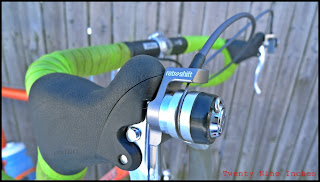 So while you can always cut costs and run bar end shifters, I thought Retroshift's solution was nifty. Putting that lever up there where you can shift easily from the hoods is nice, but I found out that convenience, reliability, and price were not the only things cool about Retroshifters. I found out I really liked the new positions for my hands and the leverage I can get for seated climbing is nice. All because I use the shifter mounts and shifters like mini-bar ends, in a sense.

Those new ergonomic plusses really were nice, and no more rattling, cleaning out gummed up mechanisms, and no more partial braking when I shift from the hoods. Retroshifters have really become a favorite of mine, and I never have to worry about them jamming or breaking. They have that "low maintenance" ease of use and living with them, and I like that.

So, yeah....they work for me. Really well. You know, I could take them off tomorrow and bin 'em easily since I have plenty of idle STI levers now! So you know I must think highly of them, and I do. In fact, if the Gravel Mutt is a keeper, I think it won't be long before a set of Retroshifters shows up on it. We'll see...... Note: Retroshift did not pay, nor bribe me for this post. I always strive to give my honest thoughts and opinions throughout.
Posted by Guitar Ted at 1:30 AM

I've always loved thumbie shifters on my mountain bikes. Even my Turner 5spot has a thumbie for the front der. The Retroshifters really fit the bill for me too. Great stuff.