Saturday, June 29th: Alarm goes off......."How do I turn off this confounded thing!" It is 5am, or so the angry red digital LEDs say. I finally find the off switch in the dark and hit the lights. I seem to be feeling really well, actually, and I knew I slept like a baby all night. Grabbing my kit, I slather on the Chamois Butter, (a sponsor of Odin's Revenge- thank you!), and slide into my bibs. Not more than five seconds later, I hear a rap on the door. "It's 5 o'clock!", Chad barks as he turns back down the stairs. Hmm.....this clock must be wrong. Bonus time!

Well, not really. I should have set the alarm for 4:30am, but I did get dressed and downstairs for some Breakfast Casseroll provided by the Quigley's for our nourishment. I microwave up a plateful and as I am eating, the thought crosses my mind that MG hasn't been seen yet. I had thought I'd better go look for him when I hear someone coming down the stairs. MG appears around the corner. He is wild eyed, and obviously in a state of frenzy, as he had wanted to get up by 4:15am and have time to wake up more slowly. He sets some Breakfast Casseroll in the mic, and flits about trying to get his kit in order. Meanwhile, I am filling a dozen water bottles and packing my drop bag. Chad and Merrie leave to man the start, the volunteers all file out, and soon MG and I are alone in the house, trying to not forget anything and get the heck outta there on time to make the start.

Yeah......I guess I should have set the alarm clock earlier! That's what I get for not asking about "The Plan" the evening before. 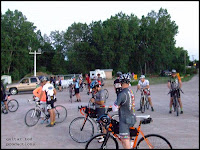 Well, we made it with plenty of time to spare, actually. The event did not get underway until about 10 after by my clock, but that was just fine by me. I had time to ride around a bit, just to sus out the rig, and then chat up a few of the other starters that were there. Jeremy and Josh also made the trip from Iowa, and it was great to see those guys around. Several other riders that I knew from Trans Iowa, or other events, were there as well. Cornbread, Aaron Schnee, and Matt Wills were some and then there were the new folks I met.

It was still pretty dark when we arrived, but soon the ever increasing glow in the East made enough light available that I wasn't worried about not having a tail light. The weather was tranquil, mostly clear skies, little to no wind, and it was about 64°, which was almost chilly. Chad whistled us up to line out behind his white pickup truck, and without any fanfare, the 41 starters rolled out into the new day towards the event's first gravel roads.

As the erotic pink and orange glow stained the sky and the roadway, we made our way across the very flat opening miles of the Platte River Valley. The wide river valley is all most folks ever see when they travel Nebraska, but  we were about to find out what the land outside of that river valley is all about. Riders were first taken by the beauty of the morning's sunrise, which was masked last year, as I was told by the first year Odin's riders, with a thick fog. Things couldn't be clearer on this morning though, and soon the lead group formed and they disappeared into the first canyon in a cloud of dust, not to be seen by me again. I was pacing myself according to my training, and I wasn't going to push any harder than I needed to right out of the gate. 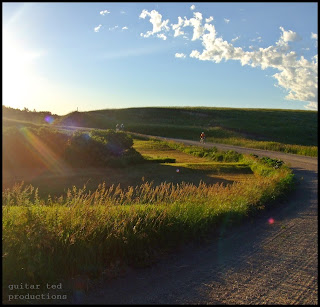 I was riding behind a couple of guys coming into the first hills and was staying just off their wheels. It felt pretty comfortable and the speed wasn't too hard- 14-16mph, so I just tooled along and was enjoying the sights. Then I figured I may as well start getting some pics.

The morning light was spectacular. It was really awesome to be there and the roads begged for a good photographer to record the grandeur of the hill country here. I couldn't stop thinking of my photography mad friends and "the light" they were missing out on. I was distracted myself, taking a bunch of images from the bike as I rode with my cheesy point and shoot.

Of course, this slowed me down a bit. I figured I better tuck the Fuji away and buckle down to riding, but after every turn around a corner, after every hill that I crested, there would be another spectacular view, and I just couldn't help but grab the camera again and start shooting. Oh well! I was having fun, and who knows when I'll be back again in such conditions?

Eventually I settled into a rhythm of checking the cues, riding as smoothly as I could, and staying within my limits for my self. (The cues were spot on, by the way.)  I had the BikeBagDude's Chaff Bags on the Fargo, so I had one extra bottle and a bunch of munchies to choose from to keep me fueled. A mix of Fig Newtons and trail mix seemed to be working well so far. Six water bottles was more than enough between checkpoints.

The gravel was very different here. The closest I have ever experienced is the glacial till type gravel of Northwestern Iowa, or the forest service roads I have seen in the Black Hills. It was loose, shifty, and there were very few "hard tracks" to run on. I would hear later that several riders were experiencing skittishness and pushing/plowing of the front wheel due to the narrower tires than I was running and loose surfaces. I didn't have any such issues, but I was running 2.1"ers and had probably the biggest tires anybody was running out there. I was glad I did too! Not that the skinnier tires weren't working, but some of those guys were not feeling very good about some of their choices.

Why? It was just loose gravel, right? Well, the thing is that the hills were steep and long enough that you could easily get over 30mph and I heard some were hitting 40mph on this loose stuff. Add in curves and things got "interesting" at times for some of the riders. I was a bit conservative due to my unfamiliarity with the roads, but I was routinely hitting over 30mph. Oh......and having disc brakes, as I did on the Fargo, was not an advantage. My rim braked bikes would have done just as well, since using too much brake would have been a really bad idea on this course.

Then there were those dirt roads! These were easily the most unique roads I have ever been on riding a bicycle, or while riding in any other vehicle, for that matter. I have seen images of Iowa's Loess Hills roads, and these seemed very similar to that. Fine, loose soil on top of packed dirt, depending on how dry it was on a particular section of road. If it was drier, it was full of more loose over hard pack to the point that it was like running on brown moon dust. The locals called it "talcum".

I had hooked up about halfway to Checkpoint #1 with a single speed rider named Craig. He appeared to be of around my age, but he was definitely far fitter. His legs were like tree trunks and full of muscle. I saw immediately he had no problems climbing the steeps, and then I found out why: He rides nothing but single speeds and  he lives and rides around Rapid City, South Dakota. Yeah.....now it makes sense!

Okay, so on flatter stuff, I would be the better, but no- Craig could gap me off at will, but generally he stuck around and we both had a great chat, enjoyed the scenery, and pushed along at generally the same pace as each other.  Craig said this was his second ever gravel grinder. He had done the Gold Rush 100 just weeks before this event. He was taken by the sort of folks that come to gravel grinders and he seemed to be really enjoying all of what Odin's Revenge had offered up so far. That was fun to experience with him.

Soon we made the turn to the road leading to checkpoint #1. A big, fast downhill and the requisite back up again and we were there. Rolling in together in "good time", according to Craig. I believed him, but I never verified his assessment. I knew we were going at a pretty good clip, the weather was fantastic, and I felt great.

Wow... That shot of the dirt road climb is fantastic. It shows the gradient better than any I've seen. Nice work!

I'm looking forward to your next installment...