Friday: The weekend for me kicked off at 4am on Friday morning. I was going to cover 458 miles in a day which included a stop in Lincoln, Nebraska to hook up with my good friend, MG. He was expecting me around 10 am. I needed to get a move on!

I was going to ride in Odin's Revenge, in its second year, this event is the brain child of "Team DSG". (Yes- "DSG" stands for something, but this is not a great place to let that cat outta the bag!) Anyway, it is promoted as a 180 mile event, however, this version was going to be somewhat shorter due to a change to the latter half of the course. I was okay with that. 150-ish would put me out there in "PR distance Land" if I were to finish, and that would be an outstanding accomplishment for me if I could do it.

Of course, I had no real good idea of what I was getting into here, although I had been out there to mountain bike on a previous occasion.  I also had some limited impressions from some of the riders I knew that had ridden in the previous version of this event. I figured it would have outstanding views and difficult terrain, because of that past trip out there. I was correct on both counts, but in a far more intense and impactful way than I knew.

The funny thing is, the event is in the West-Central region of Nebraska, a state which is hated on by many a motorist for being the most boring state to drive across ever.  And you know what? They are right, but they are oh so wrong as well. You see, interstate highway travelers only get one perspective on Nebraska, and it is highly unlikely that many get off the 4 lane ribbon of concrete and go further than the nearest gas station or restaurant  for resupply. Too bad. They are only seeing the most mundane parts of the state that run along the Platte River. At Odin's Revenge, we got to see the "Real Nebraska".  Let me tell you what- more folks than just me were surprised to find out that Nebraska is hilly, stunningly beautiful, and makes for one tough little bicycle ride!

My trek to Lincoln was uneventful. I found MG's casa and we got caught up on all the latest things going on in our lives. I helped MG get loaded up, I transferred my bits to his Suby, and we hit the road westward. We had plenty of time and the pace was very casual. The miles whiled away as MG and I, (both folks with a propensity to yak a lot), had no problem filling the time with interesting things until we were at the KOA Kampground in Gothenburg.

MG and I just pulled right in and kept right on chatting with the ever increasing crowd. The Quigley's, Chad and Merrie, who were there setting up along with Kyle Vincent, were all glad to see us show up. MG and I were to be staying at Casa La Quigley for Friday and Saturday evenings, and so were a few of the volunteers as well.

Soon there was beer and whiskey being passed about, and Paul Siebert even got out a Hammered Dulcimer and entertained us with his mastery of that instrument, along with his guitar, banjo, and squeeze box chops. It was pretty awesome!

Along about seven o'clock, Chad whistled and the assembled crowd listened up to a few brief words about what to expect for the event the following day. There was a raffle, in which my name got called, and I chose some wool Kona socks for my wife. Then there were a few words about a special someone that inspired the Odin's folk and others to do what they do and a bottle of whiskey was presented to that fellow. (Okay......it was me.) I was flabbergasted and humbled, to say the least. (Thank you for your kind words Mr. Bergen, and to all the DSG guys and gals.) With that all said and done, many folks started to wander off to their respective beds, but of course, MG and I hung out till just about the end of things. I guess that was about 11pm or so, but I can't recall with any clarity what time it was exactly. 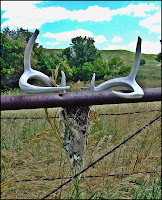 We finally hit the hay, at any rate, and were excited to get up at "o'dark-thirty" for the final preparations to ride this challenge. I was pretty relaxed, and probably had a bit too much to drink and not enough water, but hey- I was having fun, and I was spending time with some people I don't get a chance to chat with casually very often. Some I haven't seen for a few years or more, so I didn't sweat it.

The plan for the next day was........oh yeah.....there was no plan! In all the hoopla of the evening, MG and I never really did nail down anything solid for a plan for the morning. (Well, maybe he said something- but I can not recall!) Anyone that knows either one of us really well will have no problems at all believing that!

Okay, well that was Friday. Stay tuned for the race report from Saturday. I am not really sure how I will break it up, but I suspect this will take at least two more posts to get it all out. Thanks for reading!

Pre-Race drinking, late to bed, and no ride plan. Kudos if you were able to pull that off.

Well, as I recall, there were a lot of riders doing the same. In fact, the third place finisher was one, and he stayed up later than I did. So there ya go. It's best not to judge unless you know the whole story.....

How cool was that - the dulcimer, banjo, etc...!!!! I agree, Nebraska is a nice scenic drive (outside of the Interstate).

We have stayed at the KOA in Gothenburg before. It's run by a very nice family from Northern England, and the camp store there has always been quite an Aladdin's cave of British food products.

No plan whatsoever... It only added to the adventure, right?!! LOL!!!

What an awesome weekend, and a well-told story too! Thank you for it all, my Brother!