Note: I am not really too keen on doing "product reviews" on this site, (that's why I have the other sites), but I know this blog has a lot of readers that may wonder "what works for me" and what doesn't. So, I've come up with a series that will allow for my recommendations called "WW4M", (What Works For Me"), and here's another one.... 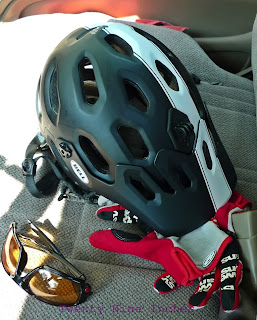 Bell Helmets are the ones for meeeeee! Ha! Well......it is true. They are. There's a good story behind this too. It goes back a ways to my high school football days.

My time spent playing football from 9th grade through until 12th grade was all done in the same helmet. The school had to special order my helmet because my noggin was so big! It's a 7 7/8ths hat size, or about 64cm around the "dome". The high school, figuring that I had soiled the helmet for four years running and that they probably wouldn't ever need it again, let me have it after the senior season was over. Yep! Ever since then, finding a proper hat, let alone a bicycle helmet was frustrating.

In fact, I never wore a helmet for years. That is, until one day I crashed and came millimeters from hitting my skull on a concrete water collection box. That was my "wake up call", if you will. So, I set out to find a helmet that might work. This would have been about 1992.

I stumbled upon a Shoei model, (precursor to Troy Lee Helmets),which looked close, and ordered it up. It had a ton of foam material that I was able to dremel away to get a custom fit. I ended up owning two of those, and then moved to Giro helmets, which always fit weird on my head. A friend suggested I try a Bell Helmet, and it was love at first fitting. I've been wearing size Large Bell helmets ever since. Nothing else I've tried, (and I've tried others), works as well for me.

So when it came time for a new helmet to fit my longish, narrowish, egg shaped brain case, I went with the newest mountain bike helmet from Bell, the "Super". In many ways, I feel it is the best Bell helmet yet for off road. 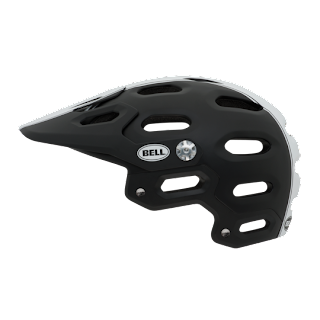 Actually, it sort of reminds me of that old Shoei helmet I used to have. The Super sports a big visor, that moves up and down a fair amount. It has a thicker-than-road-bike helmet shell and thicker absorbing foam under that. It's got a big aluminum fastener for the visor, just like the old Shoei did too.

But the Super is very different in some key areas. Of course, fit is the major one. I didn't have to dremel away any material on the Super! But there are some cool details I like. One of them is the strap system, which instead of being a webbing that intertwines into the helmet structure, is much more like my old football helmet, in that the straps are anchored into the "tabs" of the shell that come down either side of your ears. This makes the Super fit like a "helmet", and not like a "bicycle helmet", if that makes any sense. That said, it does have a rear structure that grips the back of the head via an adjuster knob.

The Super also comes with a removable mount for a Go-Pro type camera. In fact it is a Go-Pro mount. I do not own a Go-Pro, but this might be a cool detail that you may appreciate. I happen to like the back of this helmet, which doesn't look all "aero" and pointy. This appeals to me on the looks basis, but also should prove to be hood friendly in Winter. The Super's visor is removable, but I have kept it on, and I like it for deflecting the odd branch, dirt clod, and it does a fair job of keeping the sun out of my eyes.

I was a bit put out that I could not place my eyewear in the vents above the visor though, but I did discover the trick. You have to push the visor up, and then stick the glasses in the vents underneath the visor, then everything is right with the world again. Okay- with that crisis averted, I was settled and I can say the Super is, well.........super! I like it, and it works really well for me. It is no hotter than my roadie based helmet, and it has more coverage than that helmet does, which is probably a good thing for off roading. My only complaint so far is that the Super is heavy. A long ride might make me feel a bit like I wished for my lighter helmet, but sometimes I don't notice this. The Super weighs in at 430 grams. My roadie helmet, a Bell Ghisallo, weighs in at 350 grams.

Bell has a trick goggle system for this helmet I want to check out for winter fat biking. But even without that, I know this is my off road, fat bike in Winter helmet of choice. It's got all the bells and whistles: X-static padding, the little dial in the back to fit the thing onto your skull, and adjustable straps with cam locks that are easily adjusted. The Super comes in several arresting color combos for about $125.00, which I find quite reasonable.

So, yeah....this works for me really well.

Note: I purchased this Bell Helmet Super with my own cashola, and I was not asked for this review, or compensated for it in any way. So there!
Posted by Guitar Ted at 1:30 AM